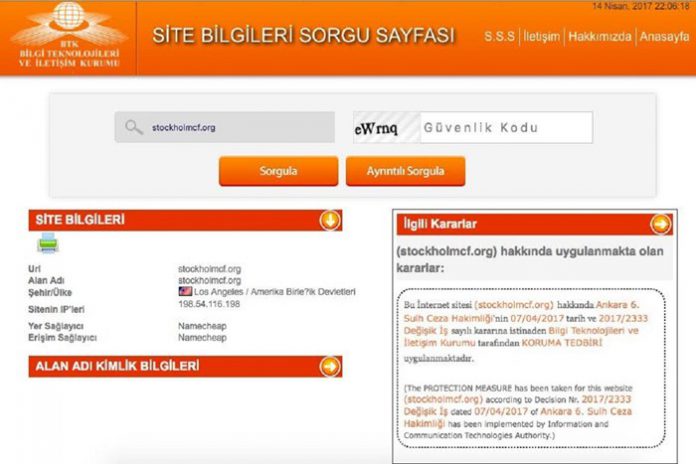 An Ankara court has ruled to block the website of the Stockholm Center for Freedom, an advocacy organization that promotes the rule of law, democracy and fundamental rights and freedoms, SCF has reported.

When visitors try to access to the website stockholmcf.org, they are prompted with a page that states “The protection measure has been taken for this website (stockholmcf.org) according to decision Nr. 2017/2333 dated 07/04/17 of [the Ankara 6th Penal Court of Peace] … implemented by Information and Communication Technologies Authority.”

Internet freedom in Turkey was rated “not free” in the 2016 Freedom on the Net report by Freedom House, a downgrade from its previous “partly free” status. The report also noted that the Turkish government frequently targets political opponents by applying the country’s draconian defamation laws.

Over 100,000 social media accounts and websites are currently blocked or banned in the country. According to Twitter’s latest government transparency report, updated twice a year, the Turkish government made 493 requests for account information and 2,232 requests to remove accounts or content in the second half of 2016, marking 76 percent and 25 percent increase, respectively, from the first half of 2016.

Yaman Akdeniz, an associate professor of law at Istanbul Bilgi University’s faculty of law tweeted on Friday that “on the eve of the referendum on Sunday, there is increase in censorship on the Internet.” He also attached a screenshot of the blocked SCF website to his tweet.