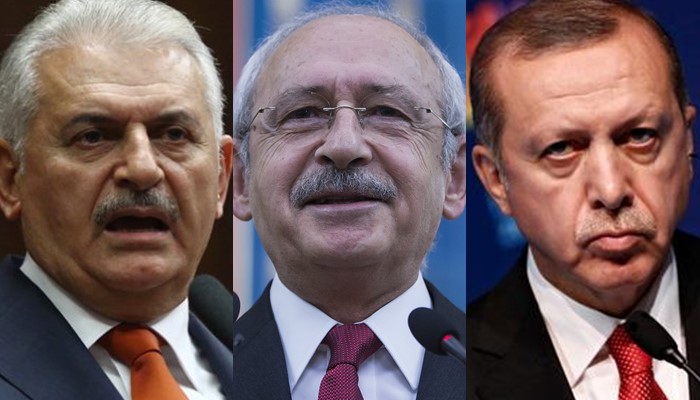 Speaking to a group of representatives from TV stations in İstanbul, Kılıçdaroğlu said his party has a dossier of evidence showing that the coup attempt was a controlled one.

The military coup attempt on July 15 killed over 240 people and wounded more than a thousand others. Immediately after the putsch, the Justice and Development Party (AKP) government along with President Erdoğan pinned the blame on the Gülen movement despite the lack of any evidence to that effect.

Erdoğan, who spoke at a rally in the Black Sea province of Rize on Monday, called on Kılıçdaroğlu to reveal the dossier in his hands before a public referendum on July 16 in which a constitutional reform package that will increase Erdoğan’s powers will be voted.

“[Kılıçdaroğlu says] July 15 was a controlled coup attempt. If you have a dossier in your hands, reveal it. It will do no good after April 16. Reveal it now,” Erdoğan said as he accused Kılıçdaroğlu of lying.

There is widespread controversy about the background of the July 15 coup attempt. Some say Erdoğan had knowledge about the attempt but did not prevent it in order to use it as a pretext for the purge of dissidents. There are also others claiming that Erdoğan was behind the coup attempt himself to launch a massive purge of his critics.

On Sunday, German intelligence expert and author Erich Schmidt-Eenboom said Erdoğan, not the Gülen movement, was behind the failed coup attempt in Turkey on July 15 based on intelligence reports from the US Central Intelligence Agency (CIA) and the German Federal Intelligence Service (BND).

Speaking on a German public broadcaster ZDF program on Sunday, Schmidt-Eenboom said: “According to CIA analyses, the so-called coup attempt was staged by Erdoğan to prevent a real coup. The BND, CIA and other Western intelligence services do not see the slightest evidence showing Gülen instigating the coup attempt.”

In the meantime, Prime Minister Yıldırım also responded to Kılıçdaroğlu’s remarks about the July 15 coup attempt on Monday and called on him to prove his claim about July 15’s being a controlled coup attempt.

Speaking to a group of merchants in Ankara, Yıldırım said: “What does a controlled coup attempt mean? Is not this an insult to our martyrs, is not this hurting their relatives and rekindling their pain? Is this recklessness towards our veterans? Some people plotted this coup, planes dropped bombs and tanks opened fire on people. The person who makes such a claim is responsible for proving it,” Yıldırım said.