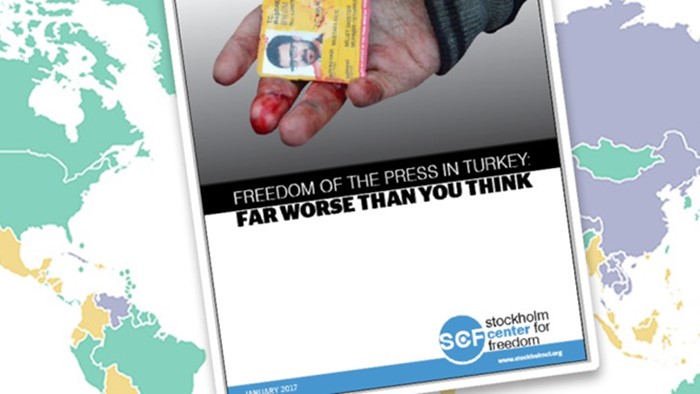 The number of journalists jailed in Turkey has reached 228, a new world record, as the massive crackdown on the free, independent and critical media by the authoritarian regime of President Recep Tayyip Erdoğan shows no sign of abating any time soon, the Stockholm Center for Freedom (SCF), a Stockholm-based monitoring and rights advocacy group, reported on Saturday.

On Saturday Turkey attracted the attention of international journalism organizations after 21 journalists who had been in pre-trial detention for eight months and were to be released pending trial on Friday were arrested again early on Saturday without ever having been freed.

SCF, as of April 1, 2017, had documented that 228 journalists and media workers are behind bars in Turkey. Of these, 194 are under arrest pending trial, most without even an indictment and none with a conviction.

According to the report, only 21 journalists have been convicted and are serving time in Turkish prisons. Thirteen journalists are currently in police custody and have not yet been formally arrested. What is more, detention warrants have been issued for 92 journalists who live in exile or remain at large in Turkey.

SCF has also finally identified 22 arrested journalists who were working for the Turkish Radio and Television Corporation (TRT), a state-run broadcasting network. SCF did not include these names in its earlier lists although it knew the total tally but was unable to identify them by name.

Turkey is the world’s worst jailer of journalists. More than half of the journalists who are in prison around the world are in Turkey, a member of the Council of Europe (CoE) and a candidate for membership in the European Union.

The Turkish government claims all jailed journalists have been accused of charges that have nothing to do with journalistic work.