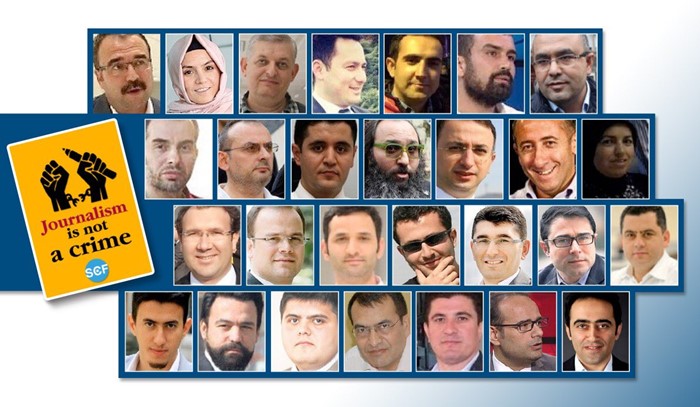 All 21 journalists who were arrested again early on Saturday, hours after being released pending trial on Friday, were taken to police headquarters after a health checkup at a hospital, the state-run Anadolu news agency reported.

The moment the court’s decision was announced for the release of the 21 journalists, pro-government journalists and figures launched a campaign on social media, angrily demanding their re-arrest.

The campaign was led by journalist Cem Küçük, a staunch supporter of President Recep Tayyip Erdoğan. In a series of messages from his Twitter account on Friday, he wrote: “If those traitors are not jailed again, some will pay a very heavy price. I say this knowingly. Things will go crazy. … [Justice Minister] Bekir Bozdağ should immediately convene the HSYK [Supreme Board of Judges and Prosecutors] and take action against some judges. This is the demand of the nation. Every prosecutor and the judge who decides to release known FETÖ supporters will be expelled from their profession. This is the absolute decision of the state.”

FETÖ is a term coined by the Justice and Development Party (AKP) government to refer to the Gülen movement as a terrorist organization despite lack of any court decision to this effect.

Pro-government journalist Ersoy Dede also wrote similar messages from his Twitter account on Friday protesting the court decision for the release of the 21 journalists.

“If there is still a board called the HSYK, an urgent decision should be made for all the judges who made the decision to release. Make nonsense arrest decisions, create unnecessary victimizations, release real FETÖ supporters. Wake up, guys. This is an operation,” wrote Dede.

Hürriyet reporter İsmail Saymaz also criticized the court decision for the release of the journalists from his Twitter account, saying: “Ekrem Dumanlı [former Zaman daily CEO] is at large, [journalist] Faruk Mercan is missing, Büşra Erdal is released. In this country, being a supporter of Fethullah [Gülen] is attributed to just Ahmet Şık and Cumhuriyet staff.”

Saymaz was referring to the arrest of Cumhuriyet journalists including Şık over alleged ties to the Gülen movement.

The development has led to huge disappointment among families of the journalists who waited for long hours in front of prisons in İstanbul to be reunited with their loved ones.