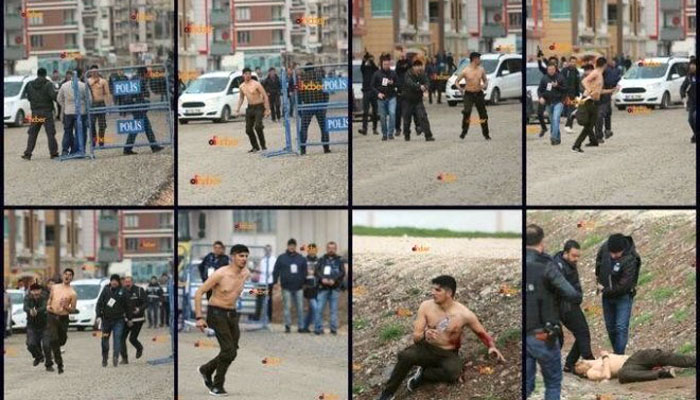 Police found poetry books and clothes in the backpack of Kemal Kurkut, who was shot dead by police at Nevruz celebrations in the Bağlar district of southeastern Diyarbakır province on March 21 on suspicion that he was a suicide bomber.

According to the dihaber website, Kurkut was studying at İnönü University’s fine arts faculty department of music and came for Nevruz celebrations in his hometown of Diyarbakır early on Tuesday. He stayed with his brother and joined in the celebrations the same day.

In a statement made on the day of the incident, the Diyarbakır Governor’s Office said Kurkut told police “There’s a bomb in my bag.” The photos show the student was carrying a knife but did not have a bag with him.

After the photos were published in the media, Diyarbakir Governor Hüseyin Aksoy issued a new statement, saying: “We said in our previous statement the suspect was carrying a knife and said he had a bomb in his bag. Security forces had to take into consideration the [safety of] people attending Nevruz celebrations and intervened. It is an unfortunate incident, and it is being investigated.”

Diyarbakır Bar Association President Ahmet Özmen said in a statement to reporters on Wednesday: “The footage of the moment in which Kemal Kurkut was shot shows that the incident is a violation of the right to life. The Diyarbakır Bar will pursue the investigation with determination.” The bar also demanded those responsible for the incident be suspended from duty.

Main opposition Republican People’s Party (CHP) İstanbul deputy Sezgin Tanrıkulu, in a parliamentary question on Wednesday, asked why Kurkut was killed when instead he could have “been “neutralized” by hundreds of police officers in the area.”

In the question directed at Prime Minister Binali Yıldırım, Tanrıkulu also asked about allegations that the police made journalists delete footage of the incident.

“Is it true that police forced journalists in the area to delete the footage on their cameras as well as reformat their memory cards?” Tanrıkulu asked.