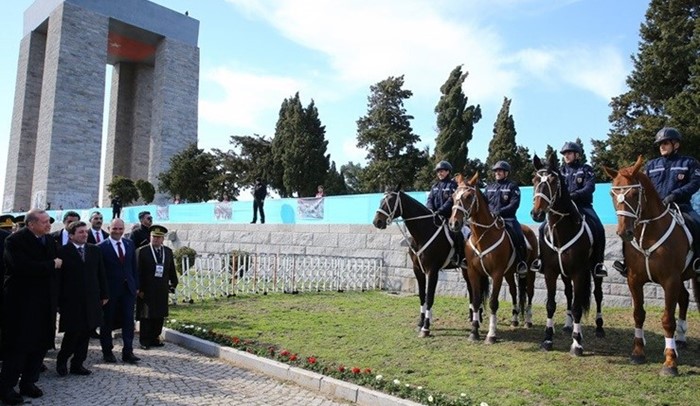 Amid a crisis between Ankara and The Hague over the expulsion of a Turkish minister from the Netherlands, President Recep Tayyip Erdoğan expressed consternation when he learned that horses from Holland were being used in an official ceremony, the pro-government Hürriyet reported on Sunday.

According to the report, during the 102nd anniversary ceremony of the Battle of Gallipoli, Erdoğan was welcomed by a gendarmerie unit on horseback at the Gallipoli Martyrs Memorial. When he inquired as to the origin of the horses, an officer said two of the four horses were from the Netherlands. “Oh no!” Erdoğan exclaimed and left the memorial soon after.

In response to the expulsion of Turkish Minister of Family and Social Policy Fatma Betül Sayan Kaya from the Netherlands and the use of police force against Turks demonstrating in Rotterdam, the Turkish Association of Red Meat Producers has sent 40 Dutch cows back to Holland last week.

In a similar move, independent member of the Beşiktaş City Council Hüseyin Avni Sipahi said last Monday that he would butcher a cow that came from the Netherlands in retaliation against the Dutch.

Supporters of the ruling Justice and Development Party (AKP) protested the Netherlands last Sunday by cutting, skewering and squeezing oranges in İzmit. Orange is the color of the Dutch royal family.

Tensions remain high between the two countries since two Turkish ministers were prevented from holding political rallies in the Netherlands last weekend and Dutch police used force to disperse Turks protesting the incidents in Rotterdam.

Two Turkish diplomats were reportedly detained after Minister Kaya was expelled from the country when she insisted on entering the Turkish Consulate General in Rotterdam after crossing the border with Germany by car.