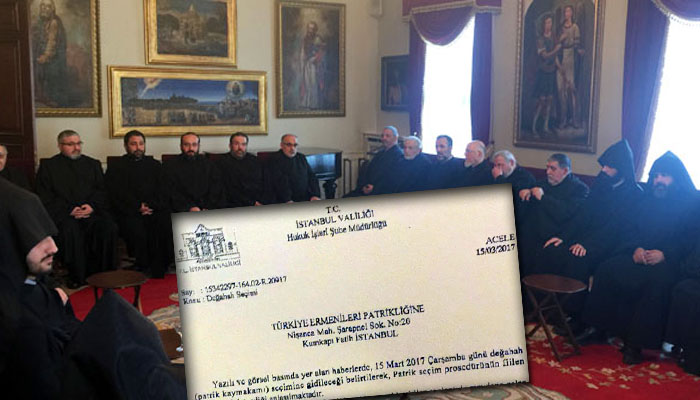 The İstanbul Governor’s Office interfered in the Armenian Patriarchate election on Wednesday by sending a notice stating that it was “legally impossible” to start the electoral process.

According to the Agos daily, the Clerical Assembly of the Armenian Patriarchate of İstanbul gathered on Wednesday and elected Armenian Primate of Germany Archbishop Karekin Bekçiyan as değabah, a trustee to start the election process.

However, Archbishop Aram Ateshian, who lost to Bekçiyan, provided a statement signed by İstanbul Deputy Governor Aziz Mercan ordering that the election process be halted.

According to the statement, which was faxed from the İstanbul Governor’s Office following değabah election on Wednesday afternoon, the election process was found to be “legally impossible.”

“Given the reports in the media, it is understood that the procedure of patriarchal election was intended to be started by electing a değabah on March 15.

“Considering the unfavorable developments that took place during a meeting on Feb. 16 at the patriarchate, it has been determined that starting the election process is legally impossible given the facts that this process might cause disturbance and division in society, that there is already an incumbent vicar and that your society knows the basic proceedings and practices concerning the patriarchal election,” the statement said.

Agos reported that Bishop Sahak Mashalian, chairman of the Religious Council of the Armenian Patriarchate in İstanbul, reacted to the statement and said: “They are intruding in our religious life. This is interference.”

Bekçiyan later announced that a delegation had demanded a meeting with the İstanbul Governor’s Office on Thursday.