Five days after Turkish President Recep Tayyip Erdoğan said Turkey’s next target in Syria would be the northern Syrian city of Manbij, which was controlled by Kurdish People’s Protection Units (YPG) forces, a convoy of US armored vehicles appeared near the city on Sunday, Agence France-Presse (AFP) has reported.

The AFP released photographs of the convoy of US armored vehicles driving near the village of Yalanlı, on the western outskirts Manbij, on March 5.

Erdoğan announced at a press conference in Ankara on Feb. 28  that Turkey’s next target in Syria would be Manbij, which has become a subject of disagreement between Washington and Ankara.

“We told this to our American friends. The PYD [the Kurdish Democratic Union Party] and YPG should move to the east of the Euphrates; the area should be left to the locals of Manbij,” said Erdoğan.

“Now it is time for Manbij, which belongs to the Arabs, not the PYD or YPG.”

Turkey’s Defense Minister Fikri Işık said on Sunday that the Islamic State in Iraq and the Levant (ISIL), the PYD and the Syrian regime have been cooperating on the city of Manbij.

“One of the most important priorities of Turkey is to prevent the PYD, which is close to committing a genocide against the Kurds, from creating a territory. It will absolutely not be allowed to create a sovereign territory. Turkey will at all costs not allow the PYD to unite the cantons [Afrin, Kobani, Jazira],” said Defense Minister Işık.

The Turkish government considers the YPG crossing to the western bank of the Euphrates, where Manbij sits, a “red line.” 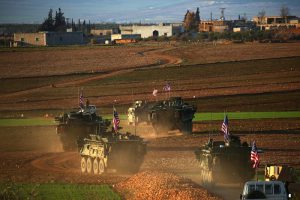