Minister campaigns for ‘yes’ votes in referendum at Trabzon mosque 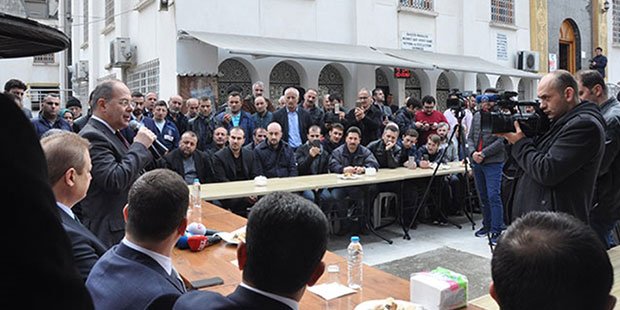 As the opposition continues to criticize the government and President Recep Tayyip Erdoğan for using Islam during a referendum campaign, Health Minister Recep Akdağ demanded “yes” votes from people in the courtyard of a mosque in Trabzon on Sunday.

Akdağ called on people to vote “yes” in a constitutional amendment package on April 16 in order to pave the way for a “new era in Turkey.”

President Erdoğan and the ruling Justice and Development Party (AKP) are pursuing an aggressive policy of propaganda ahead of the referendum.

Last month, tension surfaced at the Cahit Nakıpoğlu Mosque when the imam called on people to participate in a referendum campaign rally of President Erdoğan. One of the people who told the imam, “This is not the place for politics,” was taken outside the mosque by other participants while the imam was heard saying: “I do not engage in politics. We are siding with Muslims,” in video footage.

Hayrettin Karaman, a leading theologian and issuer of fatwas, or religious edicts, for ruling AKP circles and President Erdoğan, on Sunday said that “no” voters in an April 16 referendum that will switch Turkey to an executive presidency are opponents of Islam.