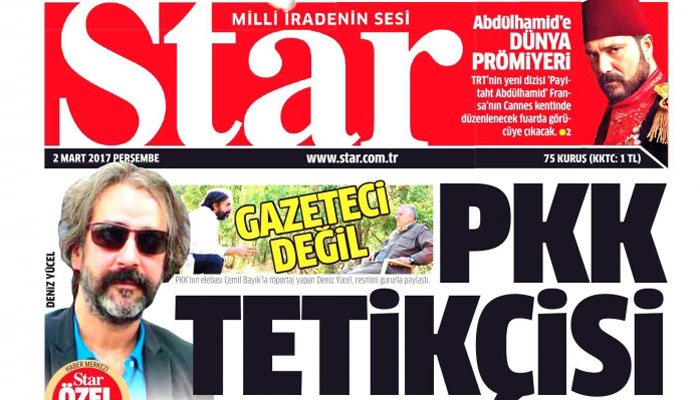 The front page of the pro-government Star daily on Thursday bore a headline that targeted jailed Die Welt reporter Deniz Yücel, saying he is not a journalist but rather a hitman of the outlawed Kurdistan Workers’ Party (PKK).

The headline on Star’s front page said “Gazeteci değil, PKK tetikçisi,” which means “not a journalist, a PKK hitman” in Turkish.

According to Star, Yücel’s reports in Die Welt, from June 1, 2016 to Feb. 28, 2017 were examined by Turkey’s Directorate General of Press and Information (BYEGM), and some of them were deemed to be promoting the views of the terrorist PKK.

Publishing a photo from Yücel’s interview with one of the PKK’s leaders, Cemil Bıyık, on its front page, Star also claimed Yücel purposefully used terms such as “despot,” “oppressive,” “anti-women” and “a leader that oppresses the opposition” in order to insult Turkish government officials.

Yücel, who was detained in Turkey on Feb. 14 as part of an investigation for publishing stories on the leaked emails of President Recep Tayyip Erdoğan’s son-in-law and Energy Minister Berat Albayrak, was arrested by a court on Monday.

The prosecutor had accused Yücel of “disseminating the propaganda of a terrorist organization” and “inciting people to hatred and enmity.”

Following nationwide protests in Germany against Yücel’s arrest in Turkey, referendum campaign events by Turkish Justice Minister Bekir Bozdağ and Economy Minister Nihat Zeybekçi in the German cities of Gaggenau and Cologne were canceled by local authorities, which caused tension between the two countries.

Both countries summoned the other’s ambassadors in Ankara and Berlin on Thursday.