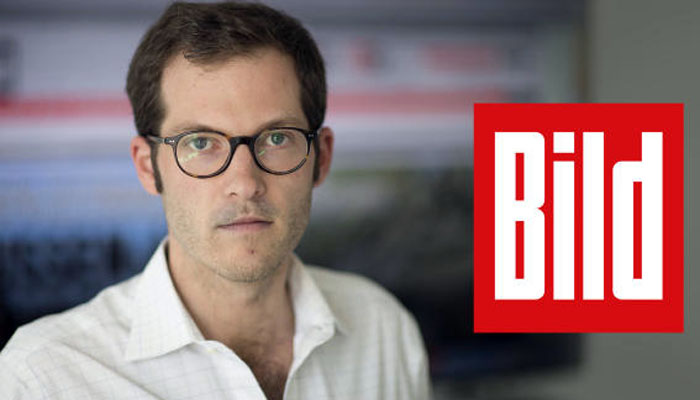 Julian Röpcke, a political editor for the German Bild daily, tweeted on Thursday that he turned down an interview request by Turkey’s state-run TRT because he believes that the TV station “shares responsibility” for the imprisonment of hundreds of journalists across Turkey.

“I received an interview request from Turkish state-owned @trtworld to discuss #Syria and #YPG issues. Here is my answer: As you know, Turkey has imprisoned hundreds of journalists due to alleged ‘pro-terrorist’ views including my colleague Deniz Yücel, who is employed by the same company as I am. You are a Turkish-state channel so you share responsibility of this unfortunate development,” Röpcke said in his response to TRT’s request.

Access to Bild’s website in Turkey was recently been blocked by the government. The decision came after Bild released reports harshly criticizing the recent arrest of Yücel, a reporter for German daily Die Welt.

“Let’s put it clear; As long as Turkey imprisons German and other journalists for their Turkey-critical views, it cannot expect others with more favourable views to be experts in one of its state or pro-government TV shows. You either accept all of us or get none. As soon as Turkey changes its approach towards journalists and free speech, I am more than happy to appear as an expert or interviewee in your program again,” Röpcke added.

Yücel, who was detained in Turkey on Feb. 14 as part of an investigation for publishing stories on the leaked emails of President Recep Tayyip Erdoğan’s son-in-law and Energy Minister Berat Albayrak, was arrested by a court on Monday.

The prosecutor had accused Yücel of “disseminating the propaganda of a terrorist organization” and “inciting people to hatred and enmity.”

German press organizations on Feb. 19 called on Turkish authorities to release Yücel. After a detention warrant was issued for Yücel, he turned himself in to police in İstanbul. 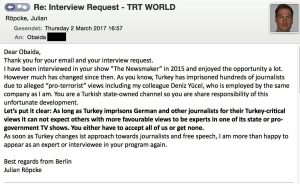