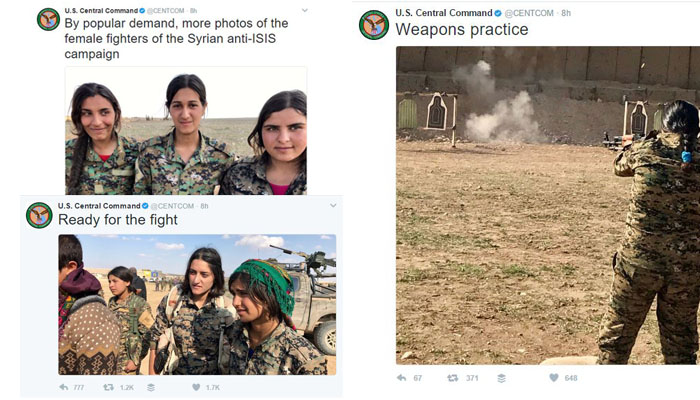 The US Central Command (CENTCOM) has shared photos of female Kurdish militia members, part of People’s Protection Units (YPG) forces in Syria fighting the Islamic State in Iraq and the Levant (ISIL), training for the takeover of the terrorist group’s stronghold of Raqqa.

CENTCOM also shared a photo of a female fighter during weapons practice followed by another post that shows three other female fighters accompanied by the text “Ready for the fight.”

The CENTCOM posts came hours after Turkish President Recep Tayyip Erdoğan announced at a press conference in Ankara on Tuesday on his way to a meeting in Pakistan that Turkey’s next target in Syria would be Manbij, which has became a subject of disagreement between Washington and Ankara as Turkey demands that Kurdish YPG forces leave the north Syrian town.

Erdoğan said the al-Bab operation was complete and that more than 3,000 ISIL militants had been killed.

“Now it is time for Manbij, which belongs to the Arabs, not the PYD or YPG,” he said.

Underlining that Ankara had reached an agreement with coalition forces for steps to be taken in Raqqa and Manbij, Erdoğan said: “We told this to our American friends. The PYD and YPG should move to the east of the Euphrates; the area should be left to the locals of Manbij.”

CENTCOM Commander Gen. Joseph Votel hosted journalists from the US media, including The New York Times and The Wall Street Journal, who visited the US-backed Syrian Democratic Forces (SDF) fronts near Kobani and Raqqa last week.

According to reports in the Turkish media, the YPG militia, which said that SDF forces might be forced to withdraw from Raqqa if Turkey launches an operation on Manbij, was told by the US that Turkey wouldn’t attack the YPG in that eventuality.

During Chairman of the US Senate Committee on Armed Services Senator John McCain’s visit to Ankara last week, Turkish officials conveyed Ankara’s dissatisfaction with the US in its partnership with the Democratic Union Party (PYD) and its armed wing the YPG, which Turkey believes is the Syrian offshoot of the outlawed Kurdistan Workers’ Party (PKK), in the fight against ISIL.

Since the US declared the YPG a strong “local partner on the ground” in the fight against ISIL and provided military support to the SDF, which mainly consists of YPG militia, Erdoğan has accused Washington of arming terror groups in Syria against Turkey.

The YPG earlier said it had withdrawn its forces from Manbij and that it is now defended by locals. However, Turkey claims that YPG forces control the north Syrian town, which is only 35 kilometers from the Turkish border.

The Turkish government considers the YPG crossing to the western bank of the Euphrates, where Manbij sits, a “red line.”

As part of Operation Euphrates Shield, Turkey sent tanks across the border to help Syrian rebels drive ISIL from the border city of Jarabulus in late August, in a dramatic escalation of its involvement in the Syrian civil war. Seventy-four Turkish soldiers have been killed during the operation since August of last year.