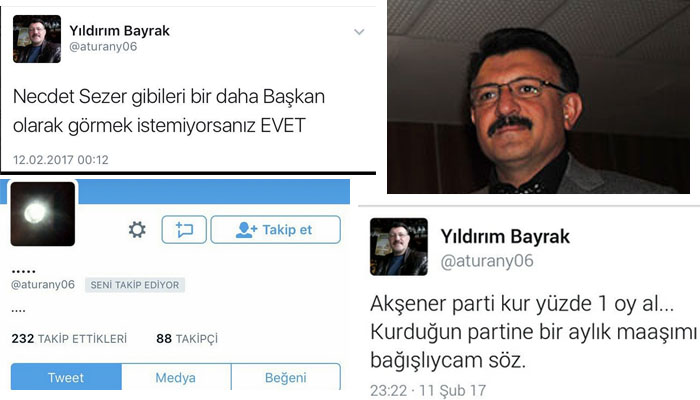 Ankara Judge Yıldırım Bayrak has deleted his personal Twitter account due to the reactions of social media users to his posts openly supporting the “yes” camp for an upcoming referendum on April 16 that will expand President Recep Tayyip Erdoğan’s powers and switch Turkey to an executive presidency.

In tweets on Feb. 11 and 12, Bayrak targeted former President Ahmet Necdet Sezer and former candidate for leadership of the opposition Nationalist Movement Party (MHP) Meral Akşener, which sparked reactions from thousands of users on Twitter.

He tweeted “If you don’t want to see people like [Ahmet] Necdet Sezer as president. [Say] YES” and “Akşener, if you establish a party and win 1 percent of the vote [in Turkey], I will donate my salary.”

Bayrak deleted his name and all posts from his account following the reactions.

On Feb. 18 Antalya Deputy Public Prosecutor Cevdet Kayafoğlu tweeted that those who vote “no” in the referendum would be treated as members of the outlawed Kurdistan Workers’ Party (PKK).

Kayafoğlu said in his tweet: “The [no] vote you are going to cast is a vote to support the PKK. Don’t say you didn’t know.”

Turkey’s Supreme Board of Judges and Prosecutors (HSYK) on Feb. 20 granted permission to its inspectors to investigate Kayafoğlu.

Turkey will hold a referendum on April 16 on a constitutional reform package that will bring an executive presidency to Turkey, with the new system concentrating power in the hands of the president.

Many people believe the constitutional amendments to be voted in the referendum will pave the way for a one-man regime under Erdoğan, who has already been criticized for being authoritarian as he has purged and jailed countless thousands of critical academics, politicians, teachers, doctors, officials, businessmen, artists and journalists.