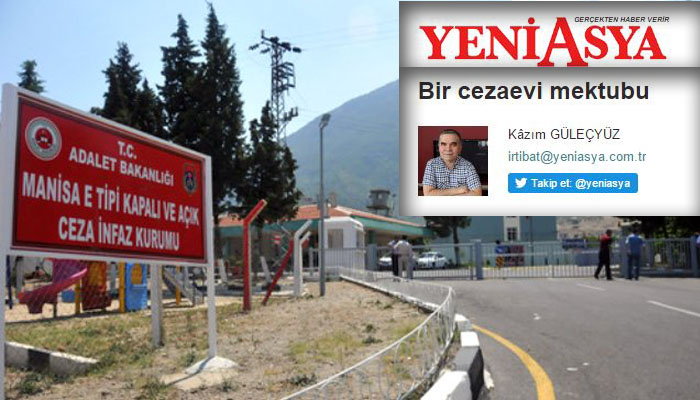 A letter from the jailed victim of a government crackdown on the faith-based Gülen movement to Yeni Asya daily Editor-in-Chief Kazım Güleçyüz shows that women, including nursing mothers, are poorly treated in Turkish prisons as five mothers who were separated from their newborn infants were kept in an overcrowded prison cell.

The 27-year-old woman whose name was not disclosed by Güleçyüz in his column said she was detained on Jan. 2 after four police officers raided her house in the early morning hours and was arrested by a court following a week’s stay in police custody, where she was in solitary confinement.

Underlining that she was afraid of being taken to Manisa Prison as she had never been in such a situation in her life, she was surprised to see 20 other women who were arrested, similar to her, over links to the Gülen movement, inspired by US-based Turkish scholar Fethullah Gülen, who is accused by Turkish authorities of being behind a failed coup attempt last July.

“Why are all these good people are in jail? Many of them are in their third month. Five of them are nursing mothers who were separated from their newborn infants…” the letter said.

“Two days after me, a mother from Soma [district of Manisa] with her three-month-old infant came. Her husband was arrested, too. And then, a 58-year-old aunt came. She was also a member of a terrorist organization! Later, a mother with her 20-year-old daughter, who was busy writing a thesis before coming here, came. At the end, two more mothers came from Turgutlu [district]. Twenty-seven women and an infant in a 100-square-meter area including 30 square meters for a bedroom and 30 square meters for a bathroom. It is hard to explain the conditions. You must see for yourself,” she continued.

Underlining that Islam forbids killing or torturing women, children and the elderly even during wartime, she said the cruelty women face in prisons in Turkey has never been witnessed in Islamic history.

“We are trying to live in a cell that was designed for eight people. We cannot even breathe. The condition of the infant is not at all good. Everybody cries here. Some under a blanket, some on a prayer rug. Slowly. Silently,” she said.

Despite Turkish Islamic scholar Fethullah Gülen, whose views inspired the Gülen movement, and the movement having denied the Turkish government and President Recep Tayyip Erdoğan’s accusation of masterminding a coup attempt on July 15 that killed over 240 people and wounded more than a thousand others, Erdoğan — calling the coup attempt “a gift from God” — and the government launched a widespread purge aimed at cleansing sympathizers of the movement from within state institutions, dehumanizing its popular figures and putting them in custody.

Over 135,000 people have been purged from state bodies, in excess of 82,000 detained and more than 41,000 have been arrested since the coup attempt. Arrestees include teachers, journalists, judges, prosecutors, police and military officers, academics, governors and even a comedian. Critics argue that lists of Gülen sympathizers were drawn up prior to the coup attempt.