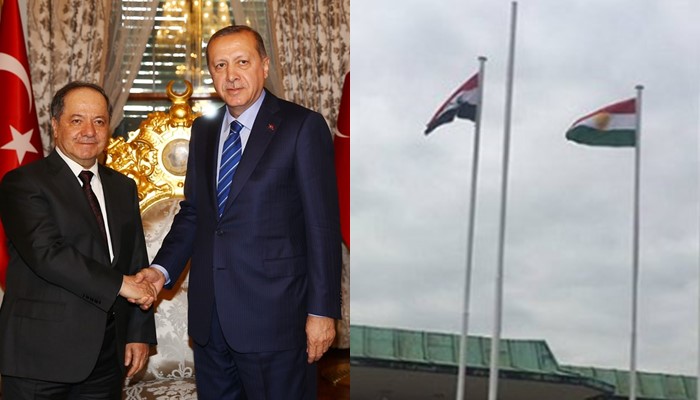 President Recep Tayyip Erdoğan met on Sunday with Iraq Kurdistan Regional Government (IKRG) President Massoud Barzani in İstanbul as the Kurdish flag was flown for the first time next to the Iraqi flag at Atatürk Airport, the T24 news website and Rûdaw reported.

As part of his second visit to Turkey in the last six months, Barzani met for an hour with Erdoğan. Barzani, who spoke with Prime Minister Binali Yıldırım in Germany last week, will continue his meetings in Ankara on Monday.

Barzani called on Turkey to release Kurdish politicians, including Peoples’ Democratic Party (HDP) Co-chair Selahattin Demirtaş, who was jailed along with 11 other deputies and dozens of Kurdish mayors and political party members in a recent crackdown.

Meanwhile, a column of Turkish military vehicles was reported to be en route to the Bashiqa base in northern Iraq, which has been the center of tension between Ankara and the Iraqi central government. According to an IHA report, the vehicles are facilitating the replacement of the current Turkish troops with new ones.

Turkey will reportedly be re-evaluating the future of the Bashiqa base after the Iraqi army clears Mosul of Islamic State in Iraq and the Levant (ISIL) terrorists.