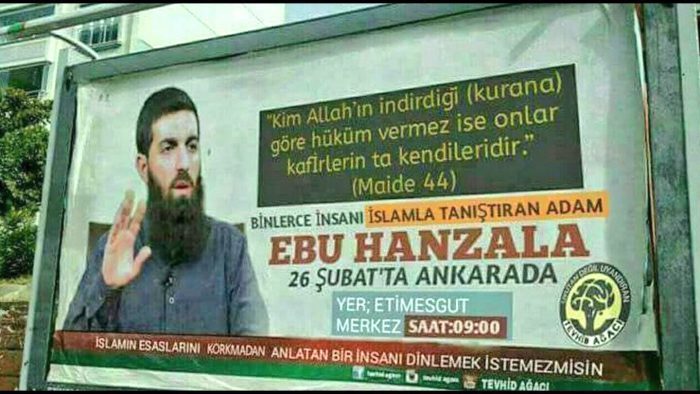 After the Ankara Governor’s Office canceled a speech on Sunday by Halis Bayuncuk, also known as Abu Hanzala, the alleged Islamic State in Iraq and the Levant (ISIL) leader in Turkey, the ISIL member called the decision a threat in a video message he issued on the same day.

“We consider this a threat,” Bayuncuk said in the video message in defiance of the authorities.

Earlier, the announcement of an event featuring Abu Hanzala as a speaker at a panel discussion organized by an extremist group in Ankara outraged many in social media.

Billboards posted in the Etimesgut district of Ankara announced that Abu Hanzala would speak in the capital on Feb. 26. The event was advertised as a speech by a person who talks about Islam “without any fear.” Abu Hanzala was described as “the man who introduced thousands of people to Islam.”

On March 25 of last year Abu Hanzala was among seven ISIL suspects who were released pending trial by an İstanbul court.

The suspects were released by the court considering “the state of the evidence against them and time already served in prison.” The court imposed a travel ban on the suspects.

Bayuncuk was detained in İstanbul with his wife in July 2015 and later arrested with several other suspected ISIL members.

Bayuncuk led an Eid prayer on July 2015 in İstanbul where he criticized the Turkish government and made a call for a “holy war.” The media reported that a group of ISIL militants — allegedly consisting of 1,000 members — gathered at a picnic site in İstanbul’s Ömerli neighborhood to perform the prayers signaling the end of the holy month of Ramadan and the beginning of the celebration of Eid al-Fitr.

Bayuncuk was also detained on Jan. 14, 2014, along with dozens of others during anti-terrorism raids on al-Qaeda cells by the police and gendarmerie units in six provinces across Turkey. He was later arrested. However, he was released in the eastern city of Van in October 2014 by a controversial court order after Turkey’s government removed the police chiefs who ordered the raids from office.