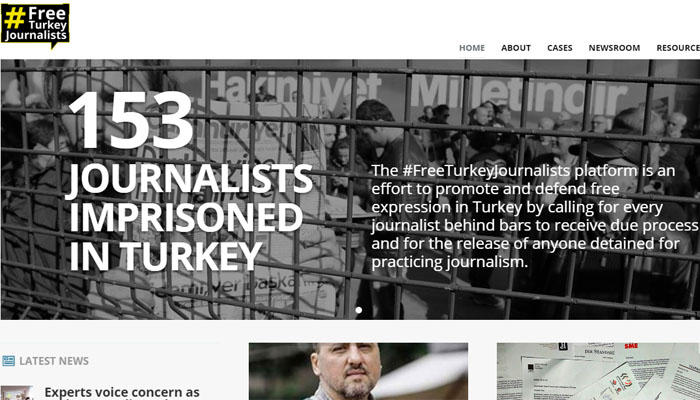 The International Press Institute (IPI) on Wednesday launched a website that will serve as a resource for information on the 153 journalists and media workers currently incarcerated in Turkey.

Part of an effort to promote and defend free expression in Turkey, the website, http://freeturkeyjournalists.com, calls for every journalist behind bars to “receive due process and for the release of anyone detained for practicing journalism,” said a press release issued by IPI on Feb. 23.

The website includes individual entries for each journalist currently in jail, with names and photos, a description of the case, and prison and trial details, gathered from publicly available information. It also provides a broader description of the media freedom atmosphere in Turkey as well as links to other resources.

Unveiled at an IPI-hosted panel discussion and solidarity event, “Turkey’s Media Under Siege,” in Vienna, the new site was described by IPI Executive Director Barbara Trionfi as a means to “help illustrate the scope of the crackdown and its impact by showing that journalists imprisoned in Turkey ‘are not just a number, but real and tragic individual stories’.”

IPI Director of Advocacy and Communications Steven M. Ellis described the website as an ongoing work in progress and said: “’Not only is the number of those arrested staggering, but many cases are shrouded in secrecy or involve murky circumstances or unsupported allegations. … While most of those behind bars are accused of supporting terrorism, the government has released little or no evidence to support those claims and far too many journalists continue to languish in prison without a firm idea of the charges they face or any real hope of justice.” Ellis added that they hoped to gather enough information ”not only to allow this site to inform the public about the targets of Turkey’s crackdown and the real toll it is taking on human lives, but to show how absurd the crackdown is and how people can support the journalists and others it has cruelly targeted.”

The Justice and Development Party (AKP) government has increasingly tightened its grip over journalists and media outlets since a failed coup on July 15 that killed 240 people and injured a thousand more. According to a report published on Jan. 26 by new advocacy group the Stockholm Center for Freedom (SCF), 191 journalists are in jail, 92 are wanted and 839 have been charged in Turkey. Turkeypurge.com calculates that 149 media outlets have been shut down by government decree since July 15, 2016. Local media had reported that 866 journalists were fired from their jobs and 620 journalists had their press cards canceled during the July-September period immediately following the abortive coup.

As part of a purge by the AKP government on dissent and the critical media following the failed coup attempt, over 135,000 people have been dismissed from their jobs due to real or alleged links to the faith-based Gülen movement, inspired by the views of US-based Turkish Islamic scholar Fethullah Gülen, who the government accuses of masterminding the failed coup. Gülen strongly rejects the accusations.