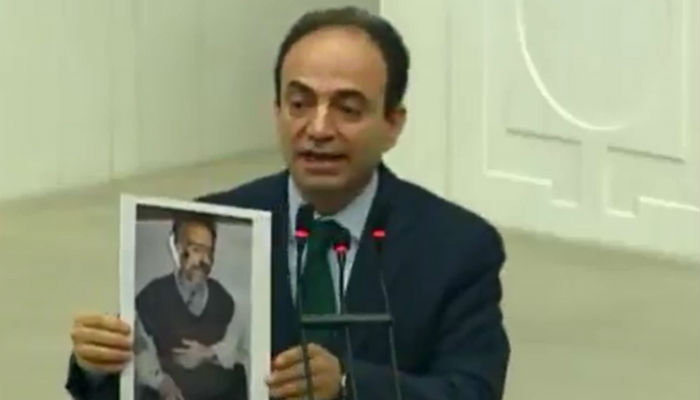 Pro-Kurdish Peoples’ Democratic Party (HDP) Şanlıurfa deputy Osman Baydemir talked about developments in Koruköy village of the Nusaybin district of southeastern Mardin province during a parliamentary session on Thursday and claimed villagers were being subjected to torture.

Koruköy has been under military blockade since Feb.11.

During a speech in Parliament, Baydemir showed a photo of a villager, Abdi Abidin, who was apparently beaten.

“Which intelligence information or which reason can legitimize torture, which is deemed a crime by all of humanity? Those behind this practice are vile people. Nowhere in the world, no law and order grants the right to an individual to torture another person,” Baydemir said.

Baydemir said what has been taking place in Koruköy is similar to what is happening in Gaza.

The HDP deputy also called on deputies from the other parties to go to Nusaybin to see what is happening in Koruköy.

In a previous statement, the Human Rights Association (İHD) announced that human rights violations are taking place in Koruköy where military operations against the terrorist Kurdistan Workers’ Party (PKK) are going on.

In the meantime, Interior Minister Süleyman Soylu on Friday responded to torture claims in Koruköy and accused Abdi Abidin, the person whose photo was shown in Parliament by Baydemir, of aiding and abetting terrorism.
“We have been following the house of that old man for five months. That house is the one that hosted plans for explosions which hurt the nation in İstanbul, Mersin and İzmir. That person you call an old man is hosting terrorism,” Soylu said.
The minister also claimed that all actions in Koruköy were in compliance with the law.