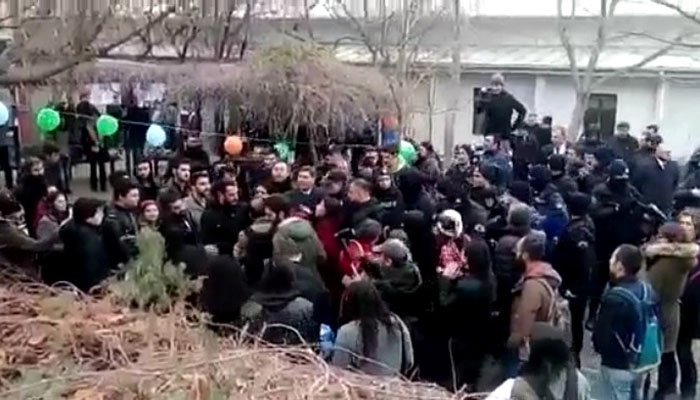 Riot police intervened in a student protest at Ankara University on Wednesday, telling the demonstrators to stop playing Kurdish music and to disperse.

A police officer told the students: “You are playing Kurdish music. It could be considered [terrorist] propaganda.”

The students were in fact playing Spanish music.

The incident took place during an event that students organized to protest the unlawful dismissal of faculty members at the university as part of a massive purge of critics of the government in Turkey.

Nearly 100 riot police were dispatched to the campus during the demonstration and ordered the students to end the peaceful protest.

Officers removed the protesters’ banners and exploded their balloons, telling them to stop playing Kurdish music and to leave the area.

The students moved their activity elsewhere.

On Monday, six students from the Aydın Anadolu İmam-Hatip High School were released following a brief detention for dancing to Kurdish music in class.

According the Doğan news agency, 14-year-old Y.B. and five of his friends were detained after the school administration filed a complaint against the students for dancing to Kurdish music during class.

Their teacher copied the music to a memory card and handed it over to the school administration, which then filed a complaint with the prosecutor’s office. The six students were briefly detained by police and referred to a court over charges of “terror propaganda.”

The court released the students on probation.