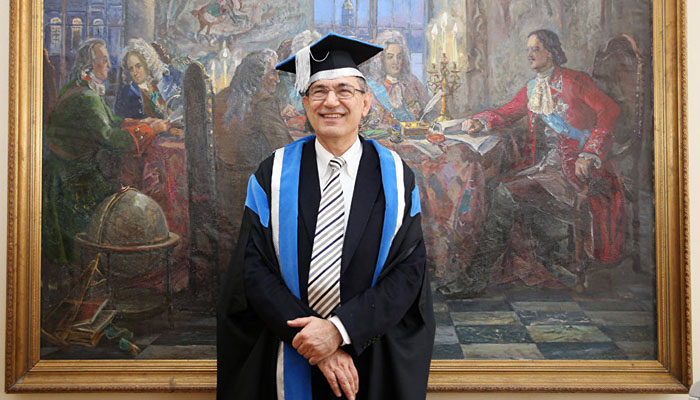 Nobel laureate novelist Orhan Pamuk said on Wednesday that he cannot keep silent while there is tremendous political pressure on dissent and newspapers critical of the government are being closed down in Turkey.

Speaking during a ceremony at St. Petersburg State University on Monday where he was given an honorary doctorate in literature, Pamuk said the problem in Turkey is not the Islamization of people by the government, but the limiting of their freedoms.

“It is difficult not to speak politics. These days newspapers [critical of the government] are being shuttered, and there is tremendous political pressure [on dissent]. So I don’t want to be silent. The problem is not the Islamization of the people [by the government]; it is that some don’t want to be [Islamized]. The problem is not being free,” he said.

As part of a purge by the Justice and Development Party (AKP) government on dissent and the critical media following a failed coup attempt on July 15 of last year, over 135,000 people have been dismissed from their jobs due to their real or alleged links to faith-based Gülen movement, inspired by the views of US-based Turkish scholar Fethullah Gülen, who government accuses of being behind the failed coup. Gülen strongly rejects the accusations.

As of Feb. 1, 89,775 people were being held without charge, with an additional 43,885 in pre-trial detention. Arrestees include journalists, judges, prosecutors, police and military officers, academics, governors and even a comedian.

According to a tally by Turkeypurge.com, 149 media outlets have been shut down by government decrees and 162 journalists arrested since July 15, 2016.