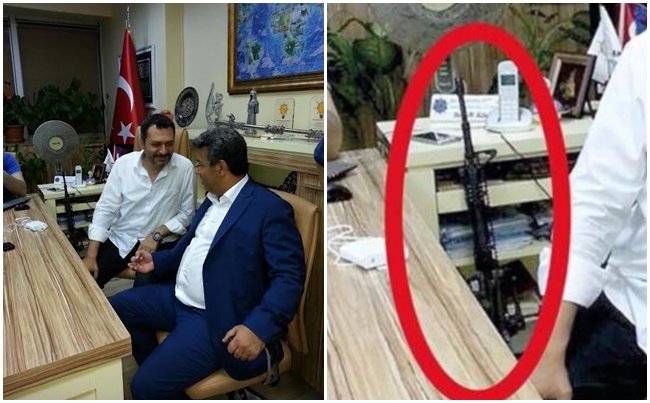 Main opposition Republican People’s Party (CHP) deputy Barış Yarkadaş on Wednesday directed attention to a photograph showing a rifle in the local branch of the ruling Justice and Development Party (AKP) in İstanbul.

In the photo, taken in the office of the Küçükçekmece district branch of the governing party, a rifle is visible next to the local party chairman, Mustafa Korkut, while he is chatting with the mayor of the same district, Temel Karadeniz.

Questioning the presence of a rifle in an AKP branch office, Yarkadaş asked why the local head of a political party keeps a rifle in his office. Yarkadaş described the situation as “gruesome” on his social media account.

Yarkadaş also referred to a recent call to arms by Orhan Uzuner, an in-law of President Recep Tayyip Erdoğan, and the warning of civil war by party officials in the event an April 16 referendum does not end in the victory of the “yes” votes.

According to Yarkadaş, such instances are not isolated events but rather the reflection of a general trend.

In response to Yarkadaş, local AKP chairman Korkut admitted that the rifle belongs to him but said the photo was not recent, adding that the photo with the rifle was taken on the night of a failed coup on July 15, 2016.

On Monday, Turkish media reported that Uzuner, the father-in-law of President Erdoğan’s son Bilal, had established an armed group to mobilize the public in the event of a new coup attempt. The people took to the streets to confront the coup plotters in July upon a call from President Erdoğan.

The name of the group is Kardeş Kal Türkiye (Remain Brothers Turkey). At the first meeting of the group in January, Uzuner explained that the aim of the group was to get people to take to the streets in the shortest time possible in the event of a coup attempt.

“Our smallest device is a whistle. There is a megaphone in my car. There are also guns that we will use when necessary. We need to make such preparations,” Uzuner said, adding that were united around Erdoğan.

Under the leadership of Uzuner, many groups have been established in the instant messaging application WhatsApp, and wireless systems are being set up in every district. Group members also get training on first aid from the Health Ministry and instructions on the use of unmanned aerial vehicles from the Civilian Aviation Directorate General.

On February 15, Sinan Oğan, one of four Nationalist Movement Party (MHP) deputies who were referred to the party’s disciplinary board for expulsion because they disagree with party policy regarding an upcoming referendum, said AKP has been giving arms training to shopkeepers in camps, the Sözcü daily reported.

“We know that shopkeepers, especially grocers, barbers, bakers and the like, have from time to time been taken to camps for arms training since the coup attempt on July 15. They [AKP] are making preparations for when they order those militias to attack the other part of society,” said Oğan in an interview with Sözcü.