Deputy public prosecutor: No offense, but ‘no’ voters in referendum to be treated as PKK members 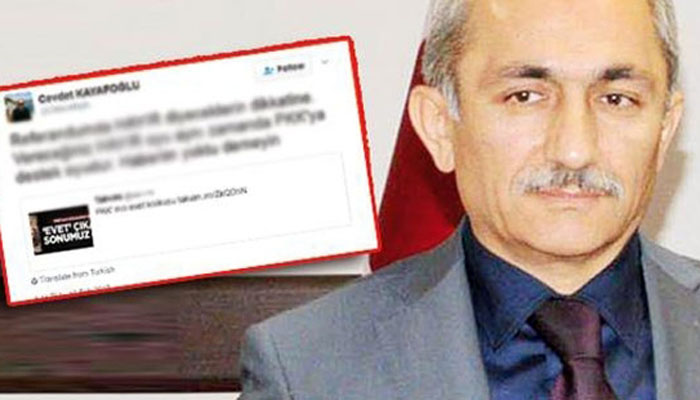 Antalya Deputy Public Prosecutor Cevdet Kayafoğlu tweeted on Friday that those who vote “no” in an upcoming referendum for a constitutional amendment package which will switch Turkey to an executive presidency will be treated as members of the outlawed Kurdistan Workers’ Party (PKK).

According to a story in the Hürriyet daily on Friday, Kayafoğlu said in his tweet: “The [no] vote you are going to cast is a vote to support the PKK. Don’t say that you don’t know.”

Underlining that the PKK called on its supporters to vote “no” in the upcoming referendum, Kayafoğlu added: “Those who vote ‘no’ run the risk of being treated the same as the PKK. No offense!”

Hürriyet said Kayafoğlu could not be reached to comment on his tweets and that his secretary said he doesn’t want to comment on the issue.

On Feb. 6, Turkish Prime Minister Binali Yıldırım said a campaign calling on citizens to vote “no” in the upcoming referendum on constitutional amendments that will expand President Recep Tayyip Erdoğan’s power and lead to a switch from a parliamentary to a presidential system of governance is being orchestrated by the PKK and the faith-based Gülen movement.

“FETÖ,” or Fetullahist Terrorist Organization, is a derogatory term coined by President Erdoğan and the Justice and Development Party (AKP) to refer to the Gülen movement, a global civil society movement inspired by the views of US-based Turkish Islamic scholar Fethullah Gülen.

Since Turkey survived a military coup attempt on July 15 that killed over 240 people and wounded more than a thousand others, the Turkish government and Erdoğan launched a widespread purge aimed at cleansing sympathizers of the Gülen movement from within state institutions, dehumanizing its popular figures and putting them in prison.