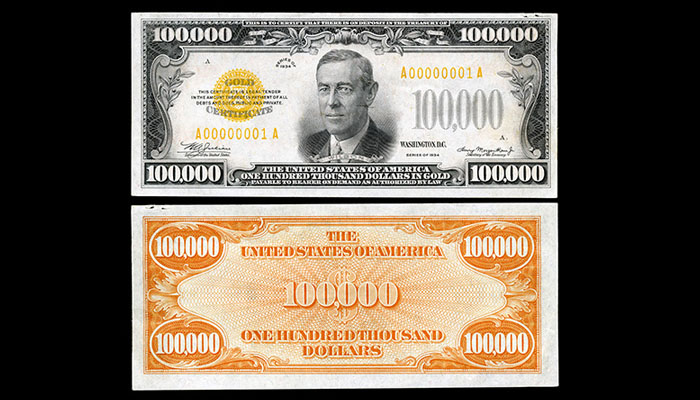 Nazif Karaman, Sabah daily special intelligence director and a commentator for the pro-government A Haber TV, claimed on Wednesday that $100,000 bills, which were printed for certain US government inter-agency transactions and never released to the public, were distributed among senior executives of the Gülen movement, which the Turkish government accuses of plotting a failed coup last July.

During a TV show on Wednesday night, Karaman produced a document, allegedly found on the computer of a Gülen follower, that contains the names, signatures and fingerprints of people to whom $100,000 bills were supposedly given, along with the bills’ serial numbers.

He claimed $100,000 bills were given to senior Gülen movement executives, that their names were recorded and that the serial numbers of the bills represent their ID numbers.

According to information on the US Department of Treasury website, the $100,000 Gold Certificate, depicting a portrait of former US President Woodrow Wilson, was used only for official transactions between Federal Reserve Banks and was not circulated among the general public and also cannot be legally held by currency note collectors.

“[The 100,000 bill] is a document with a serial number which the FETÖ terror organization grants to its [senior] members after taking their signatures and fingerprints,” he said.

“FETÖ,” or the Fetullahist Terrorist Organization, is a derogatory term coined by President Recep Tayyip Erdoğan and the ruling Justice and Development Party (AKP) to refer to the Gülen movement, a global civil society movement inspired by the views of US-based Turkish Islamic scholar Fethullah Gülen.

Fabricated reports in pro-government media outlets have been used as evidence against followers of the Gülen movement since the AKP and President Erdoğan put the blame for a failed coup attempt last July on the movement.

People who had $1 bills in their possession were also detained over links to the movement after reports spread in pro-government media that the bills were the ID numbers of Gülen movement followers.

Even the husband of Lindsey Snell, an American journalist in Turkey, was kept in police custody for over a month last August for having a $1 bill, considered sufficient proof of affiliation to the Gülen movement.

In the currently ongoing post-coup purge, over 135,000 people, including thousands within the military, have been purged due to their real or alleged connection to the Gülen movement, according to a statement by the labor minister on Jan. 10. As of Feb. 1, 89,775 people were being held without charge, with an additional 43,885 in pre-trial detention.

Arrestees include journalists, judges, prosecutors, police and military officers, academics, governors and even a comedian.