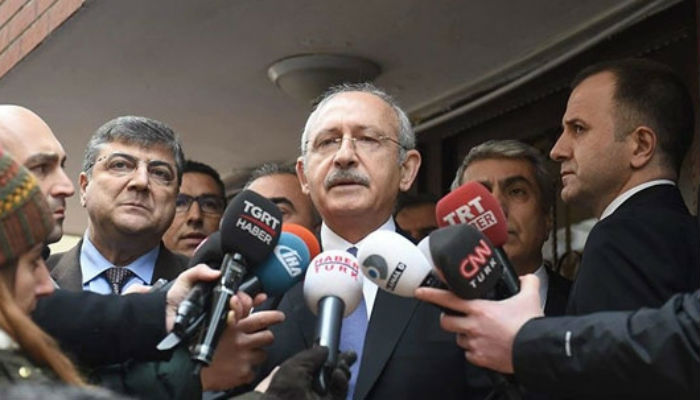 Leader of the main opposition Republican People’s Party (CHP) Kemal Kılıçdaroğlu on Wednesday visited a young, headscarf-wearing woman who was subjected to an attack on an İstanbul minibus on Monday.

The incident took place as Fatma Dilara Aslıhan Y., a high school student, was travelling on a minibus with her friends to go to Maltepe. Another woman on the minibus attacked the young woman and suddenly took her headscarf off, saying: “You are a terrorist. Everyone is dying because of you. You can’t go to school wearing a headscarf. You must die.” The incident was reported to the police by the driver of the minibus.

The attacker, identified as Ayhan Almila Kursar, was arrested by an İstanbul court on Tuesday.

Speaking to reporters after the visit, he said he offered his sympathies to the young woman and her family and added that he strongly condemns the attack and hopes no such incident takes place in Turkey again.

“I want everyone to know this well. We never want anyone to be ‘otherized’ due to their attire, lifestyle, belief or identity. Everyone should be able to live freely and in peace in this country,” said Kılıçdaroğlu.

Attacks on women due to their attire are not uncommon in Turkey. Last September, a young nurse in İstanbul was attacked by a man on a bus for wearing shorts. The incident was widely covered in the Turkish media.