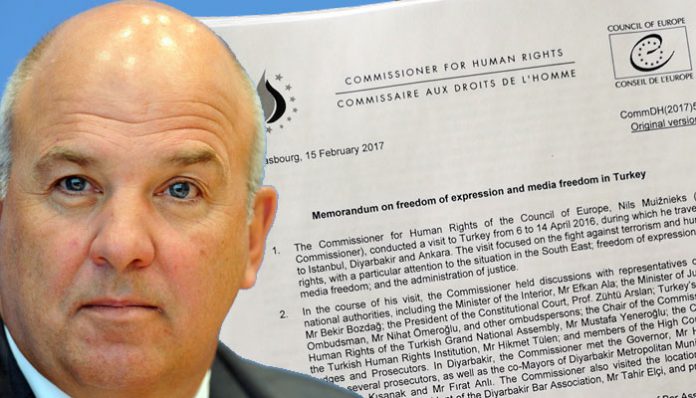 Nils Muižnieks, the Council of Europe’s (CoE) commissioner for human rights, said on Tuesday that the space for democratic debate in Turkey has shrunk alarmingly following increased judicial harassment of large strata of society, including journalists, members of parliament, academics and ordinary citizens, and government action that has reduced pluralism and led to self-censorhip, urging the government to take necessary measures to restore freedom of expression in the country.

Muižnieks said “… neither the attempted coup, nor other terrorist threats faced by Turkey can justify measures that infringe media freedom and disavow the rule of law to such an extent.”

Based on the findings of two recent visits to Turkey, Muižnieks said he regrets that tangible progress concerning media freedom and freedom of expression that was painstakingly achieved by Turkey in cooperation with the Council of Europe was halted and reversed in recent years, leading to an already alarming situation at the time of one visit in April 2016.

“In particular, the overly wide application of the concepts of terrorist propaganda and support for a terrorist organization, including to statements and persons that clearly do not incite violence, and its combination with an overuse of defamation, has put Turkey on a very dangerous path. Legitimate dissent and criticism of government policy is vilified and repressed, thus shrinking the scope of democratic public debate and polarizing society,” he said.

According to Muižnieks, the situation in Turkey has significantly worsened under the ongoing state of emergency which confers almost limitless discretionary powers to the Turkish government to apply sweeping measures, including against the media and NGOs, without any evidentiary requirement, in the absence of judicial decisions and on the basis of vague criteria of alleged “connection” to a terrorist organization.

Commissioner Muižnieks also noted while pro-government media organizations were favored in the use of state resources, media pluralism and independence were badly affected by the developments in Turkey because of government’s pervasive Internet censorship, arbitrary exclusion of media and journalists, takeover or closure of media outlets critical to the authorities, violence and reprisals against media workers and the incarceration of over 150 journalists.

Muižnieks said this deterioration goes hand-in-hand with the erosion of the independence and impartiality of the judiciary.

“While this problem affects the whole judiciary, it is in particular the role of the criminal judges of peace that is the most concerning, because these formations have transformed into an instrument of judicial harassment to stifle opposition and legitimate criticism and are now at the origin of some of the most obvious violations of the right to freedom of expression,” he said.

Strongly urging Turkish political leaders to change to course and display the responsibility and tolerance expected in a democratic society, Muižnieks called on government to redevelop the political will necessary to tackle the very long-standing systemic issues suppressing freedom of expression, including on the Internet, and to finally execute the numerous judgments of the European Court of Human Rights, some of which date back decades.

Muižnieks also asked government to lift the current state of emergency and reverse the numerous unacceptable infringements of freedom of expression, in particular media freedom and academic freedom.

“In addition, the Turkish authorities must completely overhaul the Criminal Code and the Anti-Terrorism Law so as to align law and practice with the jurisprudence of the European Court of Human Rights. Beyond these deficiencies, it is crucial to change a judicial culture where judges and prosecutors interpret and apply laws in a way that consistently undermines freedom of expression and media freedom in Turkey,” he concluded.