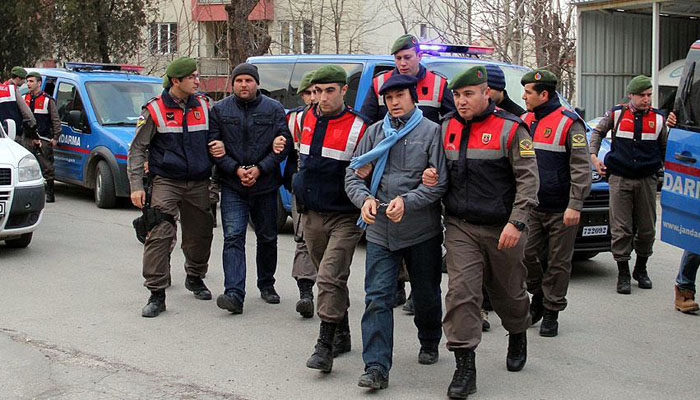 B.K., a former bureaucrat who was detained on Monday along with his wife, another couple and four children in Edirne while they were attempting to flee to Greece, said he was trying to leave Turkey since nobody would give him a job.

Gendarmes apprehended former Family and Social Policies Ministry employee B.K.; his wife V.K., a former academic; A.T., a former auditor at the Labor Ministry; and his wife, former doctor T.Ç. near the village of Kadıdondurma.

The four are reported to be among the more than 100,000 people who were dismissed from state institutions as part of government purges in the aftermath of a failed coup attempt on July 15, 2016.

The couples’ four children were also detained along with a taxi driver who is suspected to have been helping the families on their journey.

Asked by a journalist the reason he was planning to flee Turkey, B.K. said: “I am jobless, they won’t give me a job.”

Thousands of people have fled Turkey due to a massive witch-hunt conducted by the Justice and Development Party (AK Party) government against sympathizers of the Gülen movement since the failed coup attempt. The government accuses the movement of masterminding the coup despite lack of any evidence to this effect.

Over 135,000 people, including thousands within the military, have been purged due to their real or alleged connection to the Gülen movement since the coup attempt, according to a statement by the labor minister on Jan. 10. As of Feb. 1, 89,775 people were being held without charge, with an additional 43,885 in pre-trial detention due to their alleged links to the movement. Arrestees include journalists, judges, prosecutors, police and military officers, academics, governors and even a comedian.

Several tips earlier submitted to Turkey Purge confirm that both the private sector and public institutions are denying jobs to the people dismissed after July 15, fearing government pressure. (Turkey Purge)