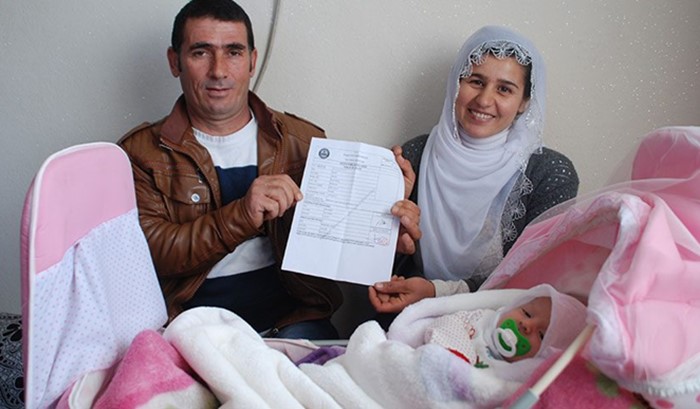 A Diyarbakır couple has named their baby girl “Evet,” which means “yes” in Turkish, to display their support for President Recep Tayyip Erdoğan in an upcoming referendum that would officially establish an executive presidency in the country if the yes votes win.

Mustafa Çelik and one of his three wives, Songül Çelik, decided to name their baby Evet due to their admiration for Erdoğan and the services they have received in their village under his rule. The father asked for a job from the president.

Mother Songül Çelik said she will support Erdoğan in the referendum because they did not have running water or roads in their village in the past, but under Erdoğan’s government a fountain was installed in their neighborhood.

Meanwhile, the local head of the Justice and Development Party (AKP), Şükrü Sayan, visited the family and presented a gift to baby Evet.

Although officials sometimes prevent parents from giving unusual names to babies in Turkey, the couple said their attempt was not blocked by the local census bureau.

Critics support a “no” vote in the referendum, stating that passage of the constitutional amendments would lead to an official one-man rule in Turkey as it grants the president unprecedented powers.