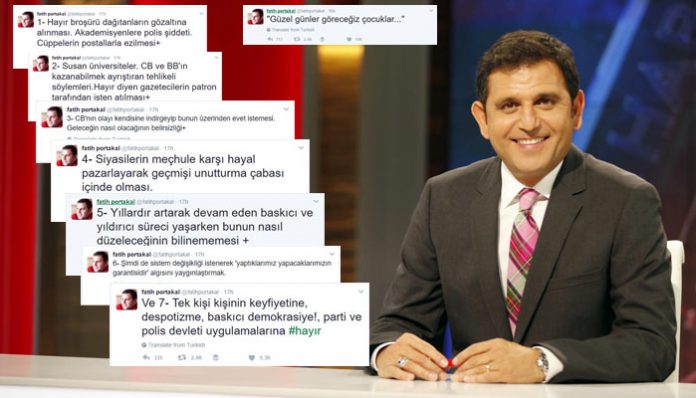 Prominent news anchor Fatih Portakal, who presents Fox TV news in Turkey, announced on Sunday that he is joining people who are voting “no” in an upcoming referendum on April 16 for a constitutional amendment package that will open the way to a switch from a parliamentary system of governance to an executive presidency and greatly expand the powers of President Recep Tayyip Erdoğan.

In a series of tweets on Sunday, Portakal reacted adversely to the dismissal of Kanal D TV program presenter İrfan Değirmenci, who was fired after he declared that he would vote “no” in the referendum.

Portakal explained why he is going to vote against the referendum, saying:

“1- The detentions of those distributing ‘no’ brochures, police violence against academics, the trampling of [academic] robes by [police] boots;

2- Silenced universities, dangerous and divisive rhetoric by the president and prime minister to win [the referendum], the dismissal of naysayer journalists by employers;

3- The president’s personalization [of the referendum] and demanding ‘yes’ through it all, Darkness of the future [in Turkey];

4- Politicians marketing imagination against the unknown and engaging in a campaign to make people forget their past;

5- Not knowing how things will be made right while living in a process that is increasingly oppressive and deterrent;

6- Now, demanding a system change and popularizing the perception that ‘what we did guarantees what we will do’; and

7- NO against, one man’s pleasure, despotism, repressive democracy, party and police state practices.

We will see great days, kids…”