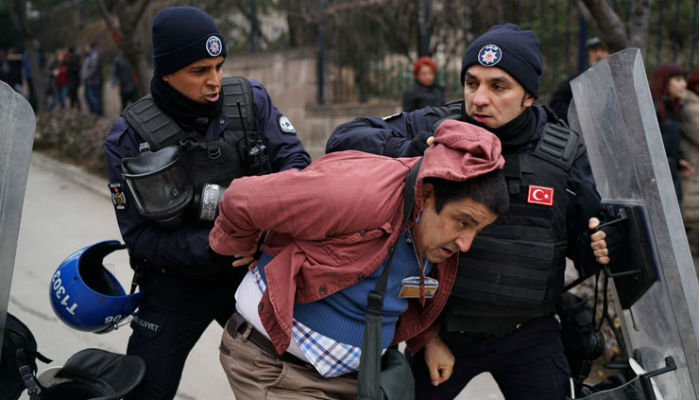 Turkish police on Friday used pressurized water and pepper spray to disperse a group of people including academics who gathered in front of Ankara University to protest a purge of academics by a recent government decree.

A total of 330 academics were purged from universities by a government decree issued on Tuesday night.

Police intervened when the crowd wanted to enter the Cebeci campus of Ankara University’s political science faculty, where 72 academics were removed from their posts by the Tuesday’s government decree.

The protestors gathered upon a call from the Ankara branch of the Eğitim-Sen teachers’ union with the slogan, “No, we are not going.”

Among the group was the former dean of the political science faculty, Yalçın Karatepe, but he was not allowed to enter the campus, either.

Police detained five people including Hakan Yüksel, one of the purged academics from the university.

Another academic who had been dismissed, Cenk Yiğiter, told the Evrensel daily that he was physically attacked by the riot police and that the university’s security guards took no action to stop the attack on him.