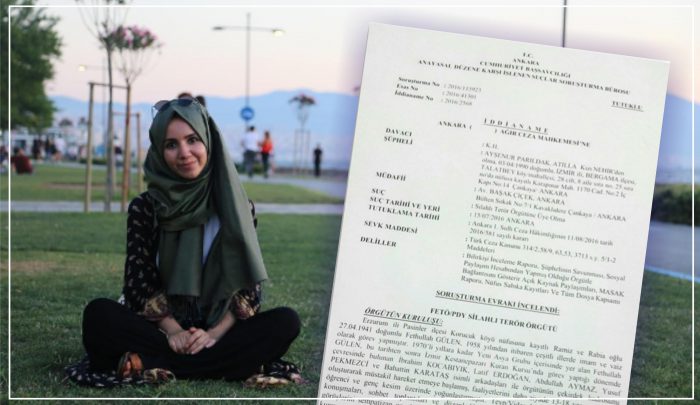 An Ankara court on Thursday ruled for continuation of the imprisonment of journalist Ayşenur Parıldak, who has been behind bars for six months.

Parıldak, a 27-year-old reporter from the now-closed Zaman daily, appeared in court in the first hearing of her trial on Thursday.

She was arrested on Aug. 11, 2016 on the Ankara University School of Law campus, where she was also studying law.

The TR724 news site on Tuesday published an exclusive report on Parıldak’s indictment, which accuses her of criticizing judges and prosecutors although no such crime exists in the Turkish Penal Code (TCK). She is also facing charges of writing “subjective stories” as well as accusations for her Twitter messages.

The prosecutor fails to mention which “subjective and one-sided” story Parıldak is accused of writing, another “crime” that is not included in the TCK.

Last October, Parıldak wrote a letter to Cumhuriyet, one of the few critical dailies left in Turkey, from Silivri Prison, talking about solitary confinement and sexual harassment, which led to a ban on letters being sent from that prison.

TR724 reported that Parıldak’s solitary confinement partially ended after 80 days in prison, although she must still spend time alone from 5 p.m. until morning.

Parıldak is also accused of being followed by an anonymous whistleblower on Twitter named Fuat Avni. The well-known user, who provided tips on corruption and unlawful government actions, was followed by over 2 million people and followed 180 people who are not being prosecuted on similar charges.

Parıldak, who started journalism as an intern at the now-closed-down liberal Taraf daily in 2011, also stands accused for this period of time since the prosecutor asserts that the Taraf daily worked for the interests of the Gülen movement, claimed by the government to be a terrorist organization. The daily was managed by Markar Esayan, currently a deputy from the ruling Justice and Development Party (AKP), who is free of any terrorism allegations, unlike Parıldak.

The prosecutor has in addition leveled accusations against Parıldak of tweeting in support of an attempted coup in July. Her retweet of a message on independent news portal P24 is also included among the “evidence” in the indictment.

Banking transactions made by the young journalist’s father are also used against her in the indictment. The transfer by Parıldak’s father of TL 1,933 to a school in the US is also cited as evidence despite the lack of any activity supporting “terrorism.”