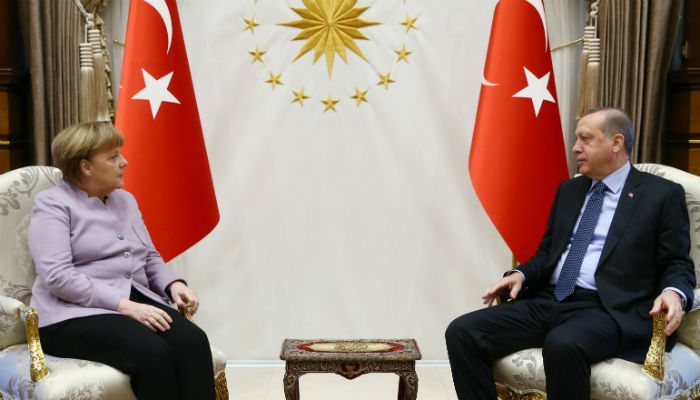 German Chancellor Angela Merkel has said she stressed the importance of press freedom and freedom of opinion in Turkey during talks with President Tayyip Erdoğan on Thursday in Ankara.

“With the putsch, we saw how the Turkish people stood up for democracy and for the rules of democracy in Turkey,” said Merkel, in reference to a failed coup attempt on July 15.

“That is exactly why, in this decisive phase, it is important that freedom of opinion be upheld, and in connection with this we talked about press freedom,” she added, sitting next to Erdoğan at a joint press conference on Thursday.

Hundreds of media outlets in Turkey were closed down by the government in the aftermath of the coup attempt, while there are currently around 190 journalists in Turkey’s prisons, most of whom were jailed over coup charges after July 15.

Allies including Germany fear Erdoğan is using the coup attempt as a pretext to curtail dissent.

The Turkish government and Erdoğan accuse the Gülen movement of masterminding the coup attempt, while the movement strongly denies any involvement.

With regards to Turkey’s extradition requests for individuals who face arrest in Turkey due to alleged links to the Gülen movement but are seeking asylum in Germany, Merkel said there needs to be evidence against these individuals for Germany to take steps for their extradition.

She said decisions by courts and independent investigations should be respected to this effect.

When Merkel used the term “Islamist terror,” Erdoğan said Muslims are offended by such a phrase since Islam and terror cannot coexist.

In response Merkel said freedom of religion is very important to her and that Germany does everything to ensure that Muslims can freely observe their faith. Merkel noted that there is a difference between Islam and Islamist.

Following Merkel’s visit, the Office of the President issued a statement saying that Merkel was told that spying charges against Turkish imams in Germany are baseless despite evidence of profiling by imams on Gülen movement sympathizers in the country.

“Problems surrounding the implementation of the agreement, which was signed in March 2016, were not solved during Merkel’s Ankara visit. No breakthrough in the transfer of 3 billion euros to Turkey and the amendment of the counterterrorism law has been made. Visa liberalization is not possible in the short term. Merkel did not give the green light to the extradition of members of the Gülen organization,” said Al Jazeera Türk in a report evaluating the German chancellor’s visit to Turkey on Thursday.

Merkel was in Turkey for a one-day visit on Thursday.