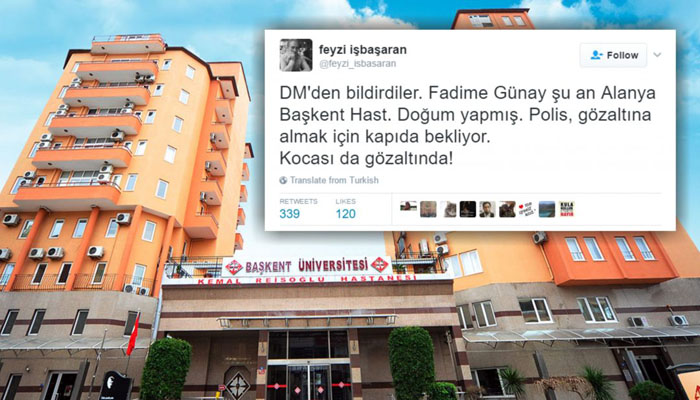 A group of police officers awaited outside Antalya’s Alanya Başkent Hospital in order to detain a woman who had given birth several hours earlier, according to a tweet by former Turkish parliamentarian Feyzi İşbaşaran.

Fadime Günay, whose husband was recently detained by police over alleged links to the Gülen movement, gave birth to a boy late on Sunday.

According to several local media outlets, the time when police came and demanded Günay’s immediate discharge from the hospital coincided with the time she was delivering the baby.

If the detention warrant for the mother is not revoked by 7 a.m. local time, Günay will be taken into custody, say reports regarding the issue.

In early January, Ş.A., a former private school teacher and mother of a week-old premature infant, was taken into police custody over links to the faith-based Gülen movement while she was on her way to the hospital to feed the baby.

As part of an investigation carried out by Aksaray Public Prosecutor Ayhan Demir, Ş.A. was detained by police and taken to Aksaray from Şanlıurfa province despite the fact that she produced hospital reports saying she should not travel as she gave birth a week earlier by C-section. She also told police officers that her baby was premature and needed to be fed breast milk and also requires special care in the intensive care unit.

A day after Ş.A. was taken into police custody, another mother known as Meryem gave birth to twins by C-section in a hospital in Konya and was detained by police despite hospital reports that she should not travel and was taken to Aksaray from Konya in a police car.

Over 135,000 people have been purged from state bodies, in excess of 82,000 detained and more than 41,000 have been arrested since the coup attempt. Arrestees include teachers, journalists, judges, prosecutors, police and military officers, academics, governors and even a comedian. Critics argue that lists of Gülen sympathizers were drawn up prior to the coup attempt.

(Parts of this report originally appeared on Turkey Purge)