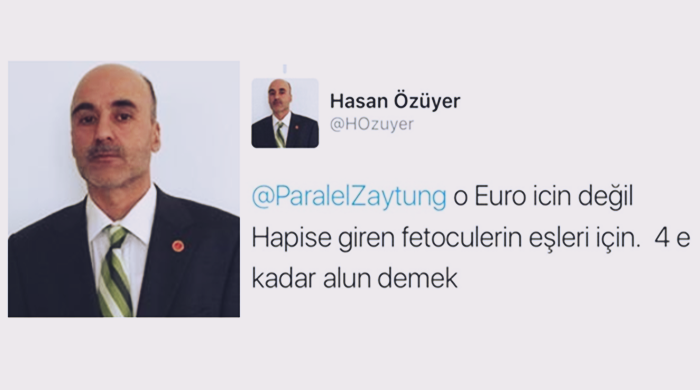 Foreign Economic Relations Board of Turkey (DEİK) representative in the Austrian province of Vorarlberg Hasan Güray Özüyer has said the Justice and Development Party’s (AKP) male supporters could enter into polygamous marriages with the wives of jailed followers of the faith-based Gülen movement.

Responding to Twitter message that interpreted the Rabia sign, a four-finger hand gesture frequently used by President Recep Tayyip Erdoğan, as meaning the Turkish lira’s hitting rock bottom at TL 4 to the euro, Özüyer wrote from his Twitter account: “That [sign] is not for the euro. It is for the wives of jailed FETÖ supporters. It means you could marry as many as four of them.”

FETÖ is a derogatory term coined by government circles to refer to sympathizers of the Gülen movement.

Özüyer’s remarks were reminiscent of the practices of Islamic State in Iraq and the Levant (ISIL) militants, who take women in the territories they occupy as their second, third and fourth wives.

Turkey’s unprecedented witch-hunt had resulted in the imprisonment of 41,752 people as of Dec. 30, according to the tally of turkeypurge.com while 135,356 people have been removed from public sector jobs since July 15.