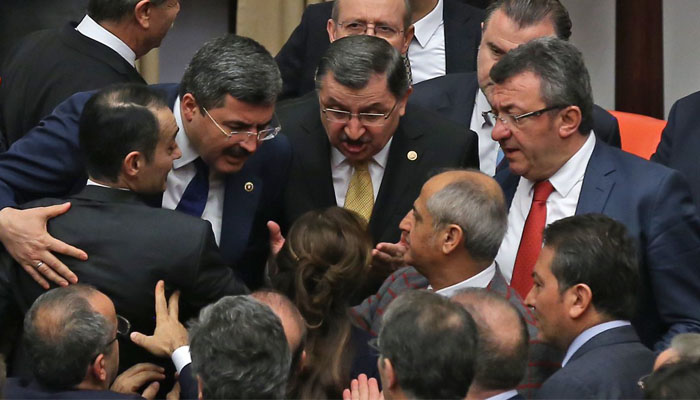 Main opposition Republican People’s Party (CHP) Kocaeli deputy Fatma Kaplan Hürriyet was attacked by ruling Justice and Development Party (AKP) Kayseri deputy Mustafa Elitaş during a brawl in Parliament between AKP and CHP deputies on Wednesday night after approval of the third article of a constitutional amendment package that will bring an executive presidency and end the parliamentary system of governance in the country.

In a video recorded by Hürriyet during the altercation, Elitaş pushes her and other CHP deputies down from the stage where the speaker’s seat is located. While shouting “Get down,” Elitaş hits Hürriyet’s camera and pushes her.

According to photos taken after the incident, Hürriyet had scratches and redness on her neck following the shove from Elitaş.

The amended article, passed with 341 votes in favor and 139 against, reduces the deputy candidacy age from 25 to 18 and also prohibits people who have links to the military to become candidates in parliamentary elections.

There has been strong opposition to the constitutional amendment package over fears of one-man rule in Turkey as it grants extended powers to the president.

Correction: An earlier version of a video for this story mistakenly used a photo of Justice and Development Party (AKP) deputy Ahmet Gündoğdu instead of AKP deputy Mustafa Elitaş. Turkish Minute regrets the error.