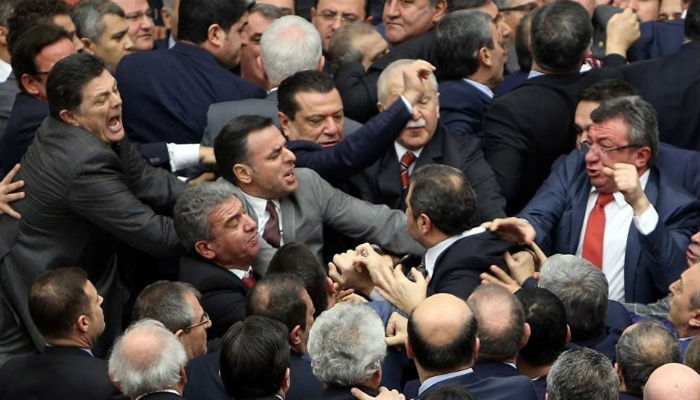 Turkish deputies exchanged blows in Parliament overnight as tempers flared in a debate on a constitutional reform package intended to expand the powers of President Recep Tayyip Erdoğan.

Deputies from the ruling Justice and Development Party (AKP) and main opposition Republican People’s Party (CHP) threw punches and shoved one another as they crowded around the assembly podium.

The AKP, backed by the Nationalist Movement Party (MHP), is pushing through the legislation that Erdoğan says will bring the strong leadership needed to prevent a return of the fragile coalition governments of the past.

During the row, CHP deputies objected to AKP members casting votes without entering the booths set up to facilitate what was a secret ballot. AKP deputies then tried to grab the mobile telephone of a CHP deputy filming the scene.

Despite the clash, the third, fourth and fifth articles of the 18-article bill were approved in the parliamentary session, which continued until early on Thursday. Debate was scheduled to resume on Thursday afternoon.

The three articles were passed with between 341 and 343 votes in favor.