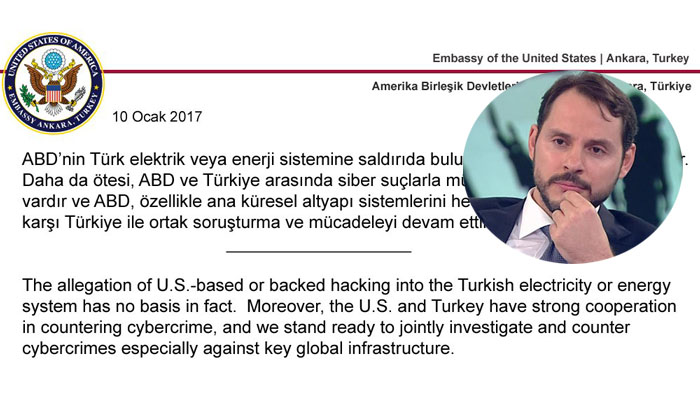 The US Embassy in Ankara on Tuesday denied allegations that the US was behind a hacking into the Turkish electricity system that caused extensive power cuts in İstanbul.

In a statement on its website the embassy said: “The allegations of US-based or backed hacking into the Turkish electricity or energy system has no basis in fact. Moreover, the US and Turkey have strong cooperation in countering cybercrime, and we stand ready to jointly investigate and counter cybercrimes especially against key global infrastructure.”

Amid complaints from residents of İstanbul and nearby cities about frequent power cuts, President Recep Tayyip Erdoğan’s son-in-law and Energy Minister Berat Albayrak said on Jan. 6 that his ministry has been under cyber attack from the US.

“Yesterday, we faced an intense, US-originated cyber attack. These attacks have been carried out systematically on different parts of the Energy Ministry, but we have repelled them all,” said Albayrak during a program aired by A Haber, which belongs to Turkuvaz Media, run by his brother Serhat Albayrak.

Stating that underground lines were cut in three districts of Istanbul in an act of sabotage, Albayrak also said there is no threat to production in terms of Turkey’s secured energy supply.

Minister of Energy Albayrak has been the subject of strong criticism due to the recent power cuts. Last week Albayrak shared a photo on his Twitter account saying that he had given the necessary warnings to bureaucrats about the continuing power cuts.

In the tweet Albayrak said that “we issued serious warnings about the situation,” adding a photo of him berating an official in an effort to increase his credibility. Albayrak displaying such a picture led to him being ridiculed on social media by people who criticize nepotism in Turkey.

Albayrak turned out to be the center of debate after his personal emails were shared by Wikileaks last month, revealing that Albayrak did not write his Ph.D. dissertation, but that a professor named Erişah Arıcan did. In April 2016 Professor Erişah was also elected to the board of Borsa Istanbul, Turkey’s stock exchange.

Another series of emails in particular confirms his efforts to ban critical media outlets in the run-up to the June 2015 general elections.