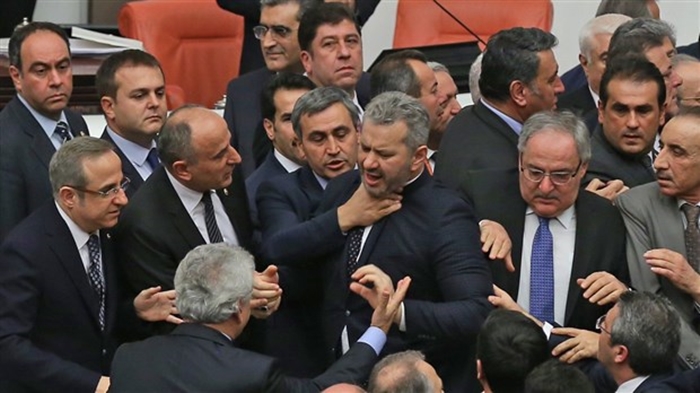 After a brawl between Justice and Development Party (AKP) and main opposition Republican People’s Party (CHP) deputies, the Turkish Parliament on Wednesday night approved the third article of a constitutional amendment package that will bring an executive presidency and end the parliamentary system of governance in the country.

The amended article, passed with 341 votes in favor and 139 against, reduces the deputy candidacy age from 25 to 18 and also prohibits people who have links to the military to become candidates in parliamentary elections.

Voting on the article resumed after a break since a brawl erupted between AKP and CHP deputies during the vote.

There has been strong opposition to the constitutional amendment package over fears of one-man rule in Turkey as it grants extended powers to the president.

Among the objections to the changes, the former president of Turkey’s Supreme Court of Appeals (Yargıtay), Professor Sami Selçuk, wrote in an op-ed that a constitutional amendment package that is currently under debate in Parliament clearly aims to concentrate power in the person of the president and eliminate the separation of powers.

Penning an article for the Cumhuriyet daily on Monday, veteran jurist Selçuk said the proposed changes are even worse than the already antidemocratic 1982 Constitution, which was drafted under a military junta.

With the proposed changes submitted to Parliament by the ruling AKP and opposition Nationalist Movement Party (MHP), the president will be vested with the power to dissolve Parliament.