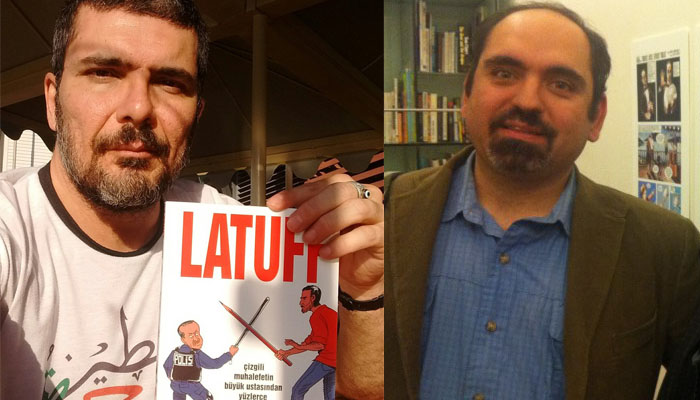 International cartoonist Carlos Latuff said in a video message on Friday in solidarity with the Turkey publisher of his cartoons, Murat Mıhçıoğlu, who was briefly detained on Thursday for “insulting” Turkish President Recep Tayyip Erdoğan, that the Turkish government should stop wasting time investigating cartoons and ideas and must concentrate on solving its security problems.

Latuff, who is known for his political cartoons mocking Erdoğan, said Turkey must concentrate on its real security problems instead of targeting the publishers of cartoons and opinions, if Turkey is a real democracy as the government claims.

Underlining that Mıhçıoğlu spent a night in jail for insulting the president by publishing his books, Latuff said: “It is hard to understand how a country with so many security problems is wasting time investigating cartoons. If Turkey is really a democracy and respects freedom of speech like the government says, no one should be investigated or taken into custody or arrested for ideas, opinions or even cartoons.”

Latuff also expressed his solidarity with Mıhçıoğlu and all free thinkers in Turkey.

Speaking to reporters after his release from custody on Thursday, Mıhçıoğlu said the prosecutor released him because the six-month statute of limitations had expired since the book was published last year.

My statement on @MURATMIHCIOGLU who was taken in custody by police and spent a night in jail for publishing my book of cartoons in #Turkey pic.twitter.com/G6VscByZ1C