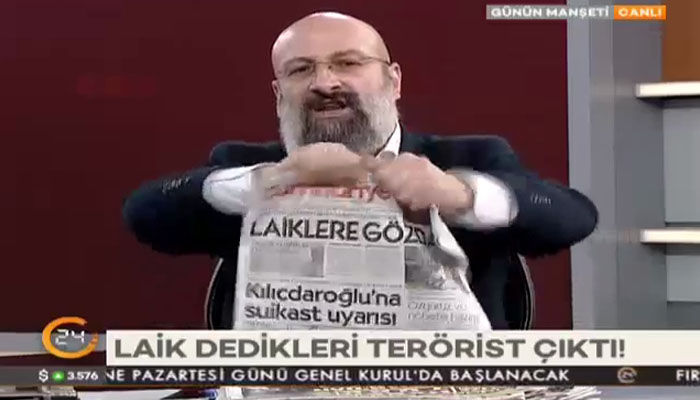 Pro-government Yeni Şafak columnist Hikmet Genç berated the Cumhuriyet daily during a live show on 24 TV on Tuesday and called those publish it “dishonorable” and “scumbags.”

Başar and Dışkaya, who were detained on Monday over a video in which they call on people to protect secularism against the government and President Recep Tayyip Erdoğan, were arrested by an İstanbul court on Tuesday for alleged “incitement of hatred and hostility,” according to a story in Cumhuriyet on Tuesday.

While talking about the arrest of Halkevleri members during the show, Genç said that Cumhuriyet misguided the public by reporting on the Halkevleri members’ arrest as an operation by the government against secularism.

Dede also presented a picture of members of Halkevleri, a secularist institution promoting public education and Kemalism, seen at a table behind which photos of Abdullah Öcalan, jailed leader of the terrorist Kurdistan Workers’ Party (PKK), and so-called PKK flags were hung.

Immediately after seeing Başar’s tweets and the Halkevleri photo, Genç asks Dede to hand him Cumhuriyet’s Tuesday edition and rips it apart, saying that Cumhuriyet calls them “secular people.”

“This Cumhuriyet does that [reports positively about Halkevleri members]. Dishonorable, scumbags. This paper is still published in Turkey. OK, let them keep publishing, and I will tear them apart every time. At least I will get a little calmer,” he said.

In videos shared on Twitter following the İstanbul nightclub terror attack, youths from the Halkevleri address people in teahouses in İstanbul asking them to unite against Islamist terrorist groups, such as ISIL, and blame the Justice and Development Party (AKP) government for their proliferation in Turkey.