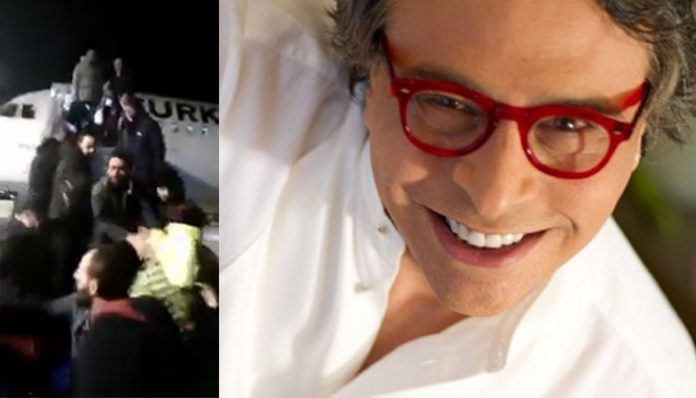 Barboros Şansal, who sparked adverse reactions due to a new year’s video he shared and was attacked by a group of passengers and detained by police at İstanbul Atatürk Airport on Monday evening, denied posting a tweet on an İstanbul nightclub attack and said his criticism in the video was distorted.

In response to a question while in custody about a tweet posted from his account, Şansal argued that he did not write such a message, and his lawyer Efkan Bolaç said the screenshot of the controversial message shows that it was posted before the attack at the İstanbul nightclub. The tweet that sparked criticism read that Sunni Muslims dressed as Santa Claus massacred people at the Reina nightclub because its owner and staff are Alevis.

Şansal, who was spending new year’s vacation in the Turkish Republic of Northern Cyprus (KKTC), was deported by Lefkoşa authorities over reactions to his video.

In the video that sparked outrage in Turkey, Şansal uses slang while criticizing several scandals that took place throughout 2016 in an effort to emphasize that there is no reason to celebrate the new year.

The pro-government media claimed that Şansal’s video was posted after the massacre at Reina. A CNNTürk reporter, Beste Uyanık, posted a tweet demanding Şansal’s punishment.  Upon reactions, the CNNTürk reporter deleted the message and condemned the mob attack on Şansal.

According to the Turkish media, passengers first reacted to Şansal when he got on the plane. Videos shared on social media showed a group of people attacking and brutally beating Şansal at İstanbul Atatürk Airport when he gets off the plane.

Şansal was detained by police at the airport.

In the video he shared, Şansal says he will drink a lot in Lefkoşa and later move to Nicosia to drink more, after enumerating his harsh criticisms about corruption, rape, bribery and bigotry in Turkey. He finishes his video with the words: “Drown in your shit, Turkey.”

Fashion designer Şansal was attacked and detained at an İstanbul airport for posting this video in the first seconds of which he uses slang denigrating Turkey.