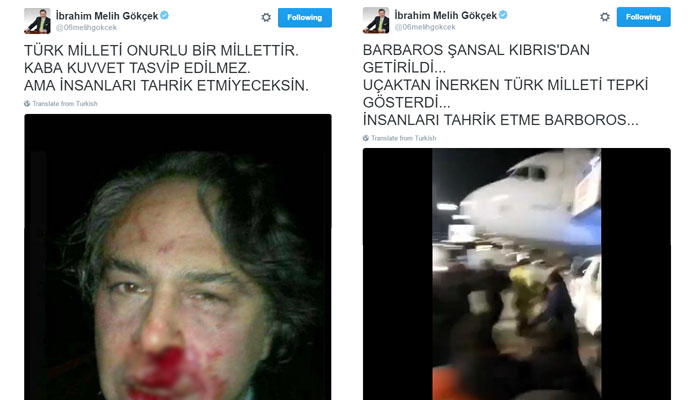 Ankara Mayor Melih Gökçek praised a mob attack on fashion designer Barbaros Şansal, who sparked adverse reactions due to a new year’s video he shared, and said Şansal provoked the “honorable” Turkish nation, on his Twitter account on Monday.

In two tweets on Monday, Gökçek said Şansal was brought from [Turkish] Cyprus and the Turkish nation reacted against his posts. He added “Don’t provoke people, Barbaros.”

Sharing one of Şansal’s earlier photos, in which his face was covered in blood during the Gezi Park protests in 2013, Gökçek said: “The Turkish nation is an honorable nation. We never approve brute force. But you should not provoke people.”

Şansal, who was spending new year’s vacation in the Turkish Republic of Northern Cyprus (KKTC), was deported by Lefkoşa authorities over reactions to his video.

According to Turkish media, passengers first reacted to Şansal when he got on the plane back to Turkey.

Videos shared on social media showed a group of people – employees of Turkish Ground Services (TGS) – a subsidiary of the state-run carrier Turkish Airlines – attacking and seriously beating Şansal at İstanbul Atatürk Airport when he gets off the plane until he was taken into a police car.

In the video he shared, Şansal says he will drink a lot in Lefkoşa and later move to Nicosia to drink more, after enumerating his harsh criticisms about corruption, rape, bribery and bigotry in Turkey. He finishes his video with the words: “Drown in your shit, Turkey.”

Meanwhile, Beste Uyanık, an anchor at CNNTürk TV, tweeted before the mob attack that Şansal must have thought he was giving a lesson. She later deleted her controversial tweet.