Pro-government media continue to blame US for İstanbul terror attack 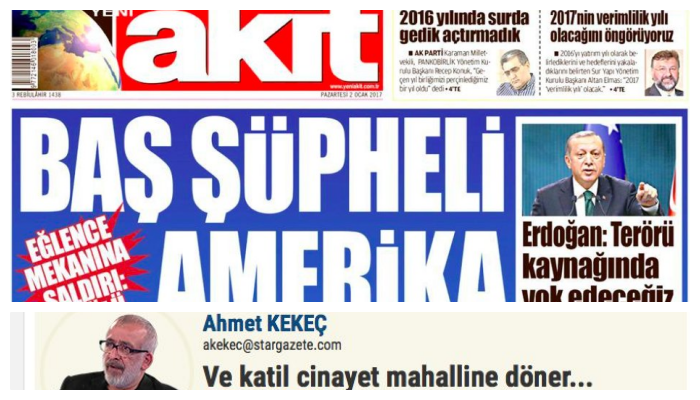 After the Islamic State in Iraq and the Levant (ISIL) claimed responsibility on Monday for a massacre in a popular İstanbul nightclub on New Year’s Day, the staunchly pro-government media continue to blame the US for the terrorist attack.

The Islamist Yeni Akit daily, the representatives from which frequently accompany presidential trips in Turkey, ran a headline on Monday saying the US is the main suspect in the deadly attack on the nightclub, which killed at least 39 people including many foreign nationals.

A columnist from the staunchly pro-government Star daily, Ahmet Kekeç, penned an op-ed titled “And the murderer returns to the crime scene,” in reference to US President Barack Obama’s message of condolence for the Jan. 1 attack in İstanbul. Following the incident, Obama had suggested cooperation against terrorism. Kekeç claimed in his column that the US provides arms to terrorist organizations fighting against Turkey.

The US has repeatedly denied such accusations that were also voiced by President Recep Tayyip Erdoğan.

A deputy from the ruling Justice and Development Party (AKP) blamed the Obama administration for the massacre, while several pro-government journalists also accused the US on social media.

Deputy Şamil Tayyar wrote on his Twitter account that there will be no peace for Turkey until Obama leaves office and urged a close watch of all US missions in Turkey as well as their “collaborators.”

In addition to Tayyar, several pro-government social media users and journalists put the blame on the US and its CIA for the terrorist attacks. 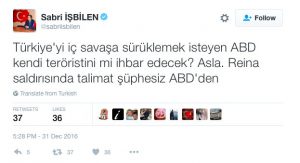 A reporter for Islamist paper Diriliş Postası, Sabri İşbilen, wrote that the order for the Reina nightclub attack surely came from the US. He argued that the US would not inform Turkey about such an attack as its goal is to drag Turkey into a civil war.

On Dec. 22 the US Embassy in Ankara had issued a security warning. Following the attack on New Year’s Day, the owner of the targeted Reina nightclub, Mehmet Koçarslan, claimed that due to “American intelligence,” Turkish security units had been taking measures for the last 10 days around the club. 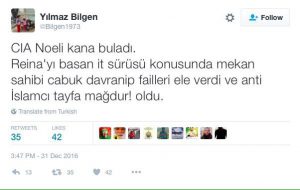 Despite the statement, the anti-American sentiment among pro-government circles is running high. Yeni Şafak reporter Yılmaz Bilgen said the CIA turned “Christmas” into a bloodbath, in apparent confusion of New Year’s Day with Christmas, a mistake commonly made in Turkey.

Meanwhile, the editor-in-chief of the Güneş daily, Turgay Güler, directly targeted journalist Amberin Zaman and actor Memet Ali Alabora for the Reina attack. Güler, who frequently travels on President Recep Tayyip Erdoğan’s private plane, argued that those two named planned the attack. Güler also named the US as the perpetrator of the nightclub attack. 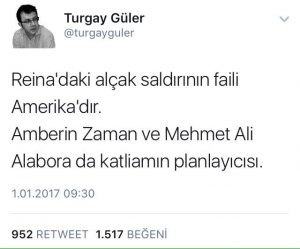