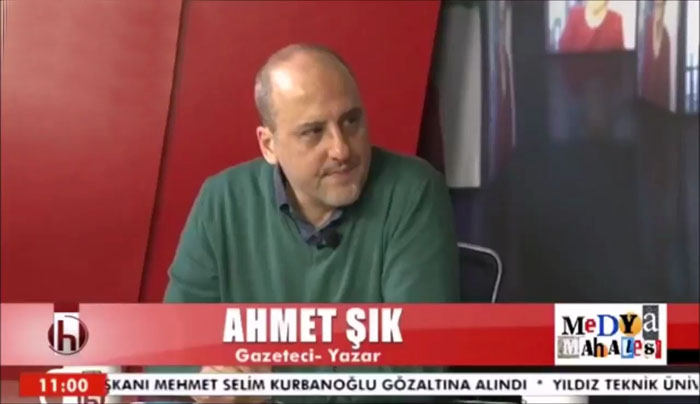 Journalist Ahmet Şık, who was arrested by a court on Friday on charges of disseminating terrorist propaganda for the Kurdistan Workers’ Party (PKK), the Revolutionary People’s Liberation Party/Front (DHKP/C) and “FETÖ,” a derogatory term used by the government to refer to the faith-based Gülen movement, said in an interview on Dec. 14 that he was warned by a person in the ruling Justice and Development Party (AKP) about his impending arrest over a book project revealing links between jihadists in Syria and Turkey’s intelligence agency.

Speaking with prominent journalist Ayşenur Arslan in an interview on Halk TV on Dec. 14, Şık said he was warned by a trusted friend who was informed by a person in the AKP that he would be arrested as part of an investigation that goes back to 2014, when he was working on a book and a story detailing links between the National Intelligence Organization (MİT) and radical jihadist groups in Syria.

“This is not a new issue. It is an investigation that goes back to two years ago. I was informed by one of my friends when I was working on a book that investigated relations between MİT and jihadists in Syria that I would be arrested, and it was suggested that I give up the project,” Şık said.

Şık was detained on Thursday and was referred to a court for arrest after refusing to respond to questions from a prosecutor, saying that journalism could not be investigated in such a way.

According to the state news agency, Şık was detained for his interview with a terrorist PKK leader, Cemil Bayık, and his columns questioning controversial MİT trucks that were allegedly carrying weapons to illegal groups in Syria.

Şık has been openly critical of President Recep Tayyip Erdoğan and AKP as well as the Gülen movement.

Şık has been questioning the arguments of the government about a coup attempt in Turkey on July 15 as he claims that Erdoğan played a role in plotting the coup.

In addition, Şık disproved claims that the murderer of the Russian ambassador to Ankara, a police officer, has links to the Gülen movement. It was Şık who first wrote that the murderer was not investigated over Gülen links, unlike thousands of others in the police force.

At the time, Şık argued that he was arrested for writing a book criticizing the Gülen movement as a result of a plot of movement sympathizers within the bureaucracy.

The AKP government is conducting a massive purge against the Gülen movement after labeling it a terrorist organization, especially after the failed coup of July 15. Over 100,000 people, including police officers, judges and prosecutors, have been dismissed and replaced.