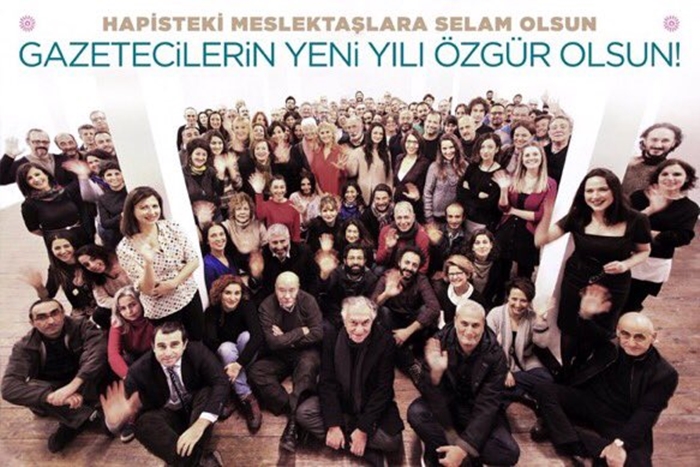 Approximately 100 journalists and representatives of media organizations gathered to send best wishes for the new year to colleagues who are currently in prison.

The journalists, who met upon a call from the “BenGazeteciyim” (I am a journalist) initiative, posed for a symbolic photograph to send wishes for freedom to jailed journalists who cannot even receive letters in prison.

Journalist Ahmet Şık, who posed in the photo, was arrested on Friday by an İstanbul court for allegedly disseminating terrorist propaganda.

Journalists shared the photo on Twitter on Saturday with the hashtag #2017deGazetecilereÖzgürlük (FeedomForJournalistsIn2017).

The Turkish Journalists’ Association (TGC) on Friday released its press freedom report for 2016, saying that 143 journalists were jailed and 189 others were attacked over the last year in Turkey.

According to the report, more than 10,000 journalists lost their jobs while 839 faced court proceedings for their news stories. in other signs of pressure on the media, the government closed down 157 media organizations and cancelled the press cards of 780 journalists in 2016.

In a separate report released on Oct. 27 by Reporters Without Borders (RSF) in cooperation with Turkish news portal monitor bianet, government domination of the media is described in detail, with findings including the fact that of the 10 most-watched TV stations in Turkey, seven are owned by people who are affiliated with the government.