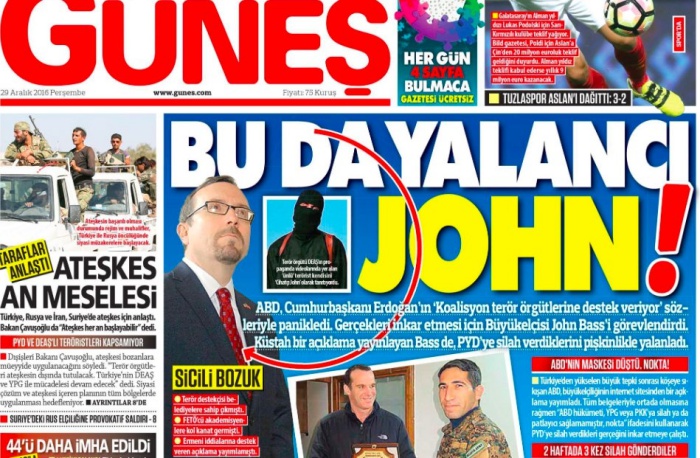 Following a strong statement by the US Embassy in Ankara on Wednesday denying accusations in the media that the United States supports terrorist groups, a staunch pro-government daily called Ambassador John Bass a “liar,” likening him to “Jihadi John” of the Islamic State in Iraq and the Levant (ISIL).

The Güneş daily ran a headline on Thursday reading “And this is liar John,” with a photo of Ambassador Bass next to “Jihadi John.”

The pro-Erdoğan paper claimed that the US panicked after President Recep Tayyip Erdoğan accused the US of supporting terrorist organizations and authorized the ambassador to deny the facts. The paper described the latest embassy statement as arrogant and accused the ambassador of lying.

The US Embassy in Ankara issued a statement on Wednesday slamming reports in the Turkish media that accuse the US of supporting ISIL and other terrorist groups in line with the claims made by President Erdoğan.

The statement, which said there is considerable misinformation circulating in the Turkish media concerning US and coalition operations against ISIL in Syria, unequivocally stated that the US has never supported ISIL, or DAESH, as alleged by the Turkish president and the media.

The announcement followed remarks on Tuesday by US State Department Deputy Spokesperson Mark Toner in which he called Erdoğan’s accusations “ludicrous.”

The embassy in Ankara said the US government did not create or support DAESH or provide weapons or explosives to the People’s Protection Units (YPG) or the Kurdistan Workers’ Party (PKK) – “period.”

Despite unequivocal denials from US authorities, President Erdoğan renewed his claim on Thursday that the US supports terrorist organizations in the region, in reference to Syria and Iraq.

Speaking at the Scientific and Technological Research Council of Turkey (TÜBİTAK) science awards ceremony in Ankara, Erdoğan said: “As Turkey, we have been calling on Western countries not to make any distinction among terrorist organizations. However, some countries, primarily the United States, have been supporting terrorist organizations that massacre the innocent in the region. When we say this, they are disturbed and through the media say ‘Don’t insult us [by saying such things]’.”

In reaction to the statement issued on Wednesday, Turkey’s minister of foreign affairs, Mevlüt Çavuşoğlu, said: “The US has provided weapons to the YPG. Period.”