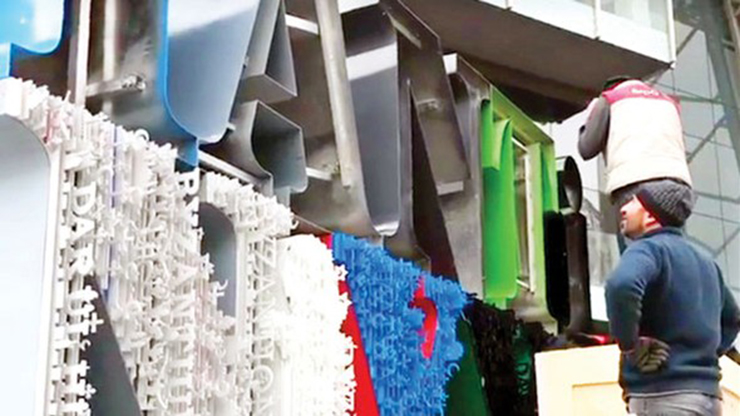 A work of art titled “Constantinople” that was put on display in front of a shopping center in İstanbul was removed five hours after its installation due to public criticism, the Hürriyet daily reported on Sunday.

The work of art, by artist Ahmet Güneştekin, was among those displayed during last year’s Venice Biennale.

In remarks to Hürriyet, Güneştekin said: “Nihat Delibalta, the businessman who bought my work of art, wanted it to be displayed in front of the A Plus AVM [shopping center], saying that everyone should see this work, which symbolizes İstanbul. Thursday was my 50th birthday. At 6 p.m., we inaugurated the work, and at 11 p.m. an angry group came to the shopping center, saying, ‘How can you display this work here? This place has been called İstanbul since 1453.’ When the angry reactions grew, the Bakırköy Municipality decided to cover the work with a piece of canvas.”

“Constantinople” was later removed from the area.

In a statement to the state-run Anadolu news agency on Friday, Güneştekin said Constantinople was the name of İstanbul during all periods of the Ottoman Empire and that this name reflected all the cultural elements of the city.

The artist said he produced the work “Constantinople” to remember it and to bring the cultural elements of İstanbul to light once again.