Immediately following the discovery that the gunman who shot the Russian ambassador to Turkey on Monday evening was a police officer, the pro-government media was quick to put the blame on the Gülen movement.

The gunman, Mevlüt Mert Altıntaş, chanted Islamist slogans also used by radical terrorist organization the Al Nusra Front after he shot Russian Ambassador to Turkey Andrei Karlov at an art gallery in Ankara. Yet, several pro-government columnists did not hesitate to label the gunman ‘FETÖ,’ a derogatory term the government coined to call the Gülen movement a terrorist organization. 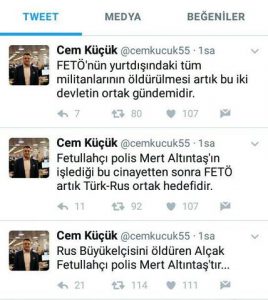 Cem Küçük, a notorious harasser who constantly targets critics of President Recep Tayyip Erdoğan, wrote on Twitter that the terrorist was a Gülen movement follower. Targeting sympathizers of the peaceful movement who live abroad, Küçük urged the state to kill them all. Speaking on behalf of Russia as well, Küçük argued that the Gülen movement is now a common target for both Russia and Turkey.

In addition, a senior official in the Turkish government told Reuters about strong signs of the attacker’s ties to Gülen without providing any evidence.

Turkey has been purging real and perceived sympathizers of the Gülen movement, which is a grassroots network centering its activities mainly on education, charity and interfaith dialogue.

The movement is known for its messages of tolerance and the peaceful coexistence of faiths and is frowned upon by many radical Islamists.