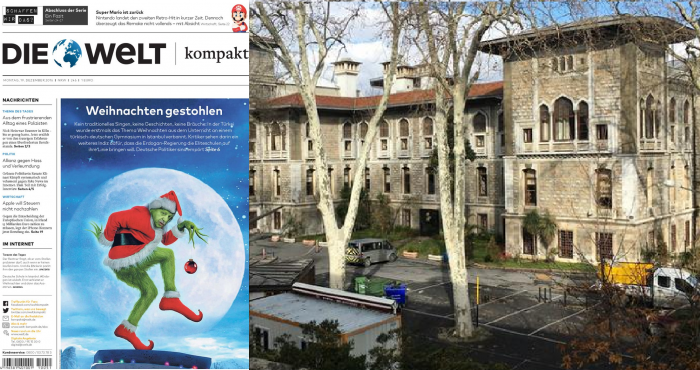 Berlin has expressed dismay that a German high school in İstanbul has canceled its traditional Christmas celebration, with teachers at the school even being forbidden to mention the topic of Christmas in their classrooms.

DPA reported that the Turkish administrators of the İstanbul Lisesi, established more than 100 years ago, announced that Christmas traditions and the singing of carols would no longer be part of the curriculum.

The move, which has angered German politicians and officials at the country’s foreign ministry, occurred a week after the school’s choir was prevented from singing at the German Consulate General in Istanbul.

“We do not understand the surprising decision of the leadership at İstanbul Lisesi,” said the foreign ministry.

“It is a great pity that the good tradition of the intercultural exchange in the pre-Christmas period was suspended at a school with a long history of German-Turkish” friendship, the government said, according to Deutsche Welle (DW).

The German Foreign Office called the decision “regrettable” and said it would seek dialogue with its Turkish partners over the incident, according to DPA, which also reported that the school itself denied on its website Sunday night that it had passed a Christmas ban.

Frank Josef Jung, a deputy from Chancellor Angela Merkel’s Christian Democratic Union (CDU) in charge of religious affairs, called the situation “completely unacceptable” and said that since Germany finances teachers at the school, it should have input into what they teach.

The abrupt cancellation is seen by German politicians as part of a move away from secularism engineered by Turkish President Recep Tayyip Erdoğan.

The Die Welt newspaper in a photograph portrayed Erdoğan as the Grinch who stole Christmas, of the famous Dr. Seuss children’s story.