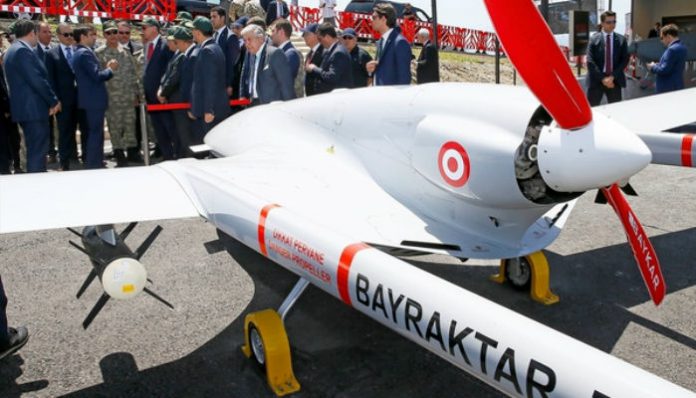 Some $36.77 million has been paid from the Turkish state budget to the Baykar Makina company, owned by the family of President Recep Tayyip Erdoğan’s son-in-law Selçuk Bayraktar, for six unmanned aerial vehicles the company manufactured, according to a story in the Birgün daily on Friday.

The controversy over the cost of the UAVs was first sparked in September with government officials refusing to reveal how much money had been paid for the vehicles.

Eren Erdem, a deputy from the main opposition Republican People’s Party (CHP), recently submitted a question to the Parliament Speaker’s Office meant for Defense Minister Fikri Işık, asking about the cost of the UAVs.

Işık responded to Erdem’s question on Thursday and confirmed reports that a total of $36.77 million was paid from the state budget to Baykar Makina for the six UAVs, which were manufactured for Turkey’s Euphrates Shield operation, launched against terror groups in northern Syria in August.

In his answer, Işık said: “The UAVs manufactured by Baykar Makina are being used by the Land Forces Command and Security Directorate General. Services and deliveries made to the Undersecretariat of the Defense Industry [SSM] are exempt from certain taxes in line with Article 13/f of the Value Added Tax [KDV] Law. Just as tax exemptions are granted to all companies in SSM deals, they have also been granted to Baykar Makina.”

The transfer of millions of dollars from the state coffers to Erdoğan’s son-in-law’s company at a time when Erdoğan and government officials are calling on Turks to sell their foreign currency in the wake of the depreciation of the Turkish lira has raised eyebrows.

In remarks to the Birgün daily, Erdem said: “While the president, AKP [Justice and Development Party] ministers, columnists and pro-AKP trolls are making fun of the people, who are overwhelmed by debt, telling them every day to exchange their dollars, they, in the meantime, transfer the dollars that have been exchanged to pro-government companies. The dollars which have been sold are going to the son-in-law, Islamic banks and pro-government businessmen who swear at the nation.”

Over the past weeks, President Erdoğan has called on citizens to convert their foreign exchange into gold or lira, claiming that “some circles” that could “not destroy Turkey with tanks and rifles” are now trying to hit the country economically.

“Those who keep dollars or euros under their mattress should turn them into lira or gold,” Erdoğan said in a speech on Dec. 4.

The Turkish currency, which has lost nearly a fifth of its value this year, booked its worst monthly performance since the 2008 financial crisis last month, hammered by a resurgent US dollar and domestic concerns.