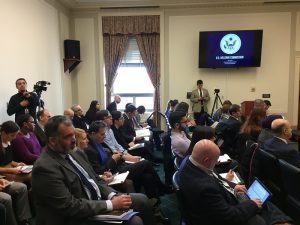 The Commission on Security and Cooperation in Europe (CSCE), which is also known as the US Helsinki Commission, on Nov. 9 held a briefing to discuss how respect for human rights in Turkey has declined dramatically since a failed coup attempt on July 15 and how the international community is responding.

Underlining that the international community agrees the Turkish government has the right to pursue justice against those who sought to overthrow it, an introductory statement by the Helsinki Commission on the briefing said Ankara’s reaction to the coup attempt has swept aside international human rights standards.

According to the Helsinki Commission, the Turkish government maintains sweeping state of emergency decrees, shuttering educational institutions, civic associations, and media organizations and arresting, suspending or firing tens of thousands of people alleged to have conspired with the coup plotters, oftentimes with little to no credible documentation.

The Helsinki Commission also said these measures following the coup attempt, along with dramatic changes to the country’s judicial system and further changes planned to the country’s constitution, are transforming Turkish society and raising serious questions about the future of Turkish democracy.

More than 115,000 people have been purged from state bodies, in excess of 80,000 detained and about 40,000 have been arrested since the coup attempt. Arrestees include journalists, judges, prosecutors, police and military officers, academics, governors and even a comedian. Critics argue that lists of Gülen sympathizers were drawn up prior to the coup attempt.

Speaking before the Helsinki Commission, Alliance for Shared Values director Aslandoğan said the human rights violations committed by Turkey’s Justice and Development Party (AKP) government include torture, violation of freedoms of expression/movement and denials of the right to due process.

Underlining that the perpetrators of the failed coup must be brought to justice, Aslandoğan noted the reactions of the government are above and beyond measures called for by law.

“[Erdoğan’s government] has seized assets from everyday Turks who have built businesses and lives through years of hard work,” he added.

Pointing to the Turkish government’s disturbing track record on suppressing free expression even before the coup attempt, Dr. Karlekar said, “Turkey has imprisoned more journalists than any other nation.”

According to Karlekar, the Turkish government, led by Erdoğan, is using the state of emergency as an excuse to further silence critical voices in Turkey. She also noted that violations of protected freedoms go well beyond justified attempts to ensure national stability and bring coup plotters to justice.

Calling on the US government to strongly express concern about the human rights situation in Turkey, Karlekar said Washington must urge Ankara to protect journalists, writers and academics. She further asked the US government to extend direct official assistance to those currently at imminent risk of persecution.

“In the name of defending democracy, Erdoğan is undermining institutions that are essential to its continued existence,” she concluded.

Another panelist who spoke before the Helsinki Commission, Dr. Danforth from the Bipartisan Policy Center, said claims of torture in Turkish prisons on coup suspects were undermining the Turkish government’s push for extradition of people abroad who are accused of links to the coup attempt.

Underlining that Turkey must adhere to the UN convention against torture, he said even government defenders are hesitant to explain the measures taken by the AKP government against people with links to the coup attempt.